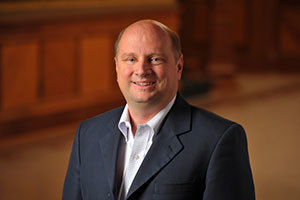 R. Scott Appleby, John M. Regan Jr. Director of the Kroc Institute for International Peace Studies and professor of history at the University of Notre Dame, has been appointed director of academic planning for a proposed School of International Affairs by Notre Dame Provost Thomas G. Burish, effective Aug. 1.

An International Affairs Working Group established by Burish has examined a wide array of possible initiatives and focused its report on the creation of a School for International Affairs, which the Working Group judged to have the greatest transformative potential for the University. The group recommended to Burish that he appoint an academic director to lead discussions with faculty, assess initial fundraising possibilities and explore in depth topics such as curriculum, staff and faculty hiring.

“Scott’s vast global experience, administrative acumen and high standards of excellence make him an ideal candidate to lead our collective examination of if and how to establish a new school devoted to internationalism,” Burish said. “I appreciate his willingness to take on this important responsibility.”

Appleby, who will remain director of the Kroc Institute until the current search for a successor is complete, said: “I am delighted to be involved in planning what could be a significant step forward in Notre Dame’s expanding international and global engagement. If it builds smartly on the strong foundation of outstanding research, teaching and public service conducted by various departments, colleges, international institutes and programs, a School of International Affairs would deepen and extend Notre Dame’s mission of scholarship in service to the common good. It’s an exciting and challenging prospect.”

A historian of religion, Appleby’s current work examines the roots of religious violence and the potential of religious peace building. He is leading Contending Modernities, a multiyear, interdisciplinary research and public education initiative at Notre Dame to examine the interaction among Catholic, Muslim and secular forces in the modern world. He recently co-chaired the Chicago Council on Global Affairs’ Task Force on Religion and the Making of U.S. Foreign Policy, which released the influential report “Engaging Religious Communities Abroad: A New Imperative for U.S. Foreign Policy.”

Appleby is the author of “Church and Age Unite! The Modernist Impulse in American Catholicism” and general editor of the Cornell University Press book series “Catholics in the American Century.” He is also the author of “The Ambivalence of the Sacred: Religion, Violence and Reconciliation” and “Strong Religion,” and the editor of “Spokesmen for the Despised: Fundamentalist Leaders of the Middle East.”

Appleby graduated from Notre Dame in 1978 and holds master’s and doctoral degrees from the University of Chicago. He and University of Chicago scholar Martin E. Marty served from 1988 to 1993 as co-directors of the Fundamentalism Project, an international public policy study, and they are the co-editors of a five-volume series of the same name.

The recipient of three honorary degrees, Appleby was inducted in 2010 into the American Academy of Arts and Sciences, the nation’s leading learned society.