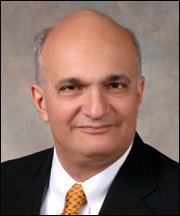 The endowment of Lykoudisdeanship is being funded by a gift from the Francis and Kathleen Rooney Foundation, a non-profit organization that supports a wide range of charitable causes.

I am honored to hold the deanship in the name of the Rooneys, who have been such dedicated stewards of the University of Notre Dame and the School of Architecture.

Lykoudis has led the school since 2002 and has been a member of the Notre Dame faculty since 1991. A national and international leader in linking architectural tradition and classicism to urbanism and environmental issues, he has devoted his career to the building, study and promotion of traditional architecture and urbanism.

A graduate of Cornell University, Lykoudis earned his master’s degree from the University of Illinois’ joint business administration and architecture program. Prior to joining the Notre Dame faculty, he worked as a project designer and architect for firms in Florida, Greece, Connecticut and New York. He also has conducted his own practice in South Bend, Athens, and Stamford, Conn. His built work includes renovation of the director’s residence at the Louis Pasteur Institute in Athens, renovation of the National
Observatory of Greece, and new construction of several private buildings and residences.

From 2005 until earlier this year, Francis Rooney served as the U.S. Ambassador to the Holy See, appointed by President Bush. Prior to that appointment, Ambassador Rooney was the chief executive officer of Rooney Holdings Inc., an investment and holding company based in Naples, Fla.  He also served as the chairman of Manhattan Construction Company, whose projects include construction of the George H.W. Bush Presidential Library in College Station, Texas; the visitor center at the U.S. Capitol; the Ballpark at Arlington in Arlington, Texas; the Reliant Stadium in Houston; and the Santa Fe Opera Theater in New Mexico.

Members of the Notre Dame School of Architecture Advisory Council since 2001, the Rooneys have been active in Catholic, political and civic circles at the state and national levels.  Other affiliations with Catholic organizations include the St. Francis Health System in Tulsa, Okla.; Cascia Hall Preparatory School, an Augustinian middle and high school in Tulsa; and the Sovereign Military Order of Malta.  They also both are trustees of the Naples Children and Education Foundation, which serves the at-risk and disadvantaged children of Collier County, Fla.

Kathleen Rooney has served on numerous museum and charity boards, including the Philbrook and Gilcrease Museums in Tulsa, and currently she is tutoring English to Speakers of Other Languages as part of the Collier County Literacy Program.

The Rooneys have three children: Larry, who with his wife, Porscha, was graduated from Notre Dame in 2004; Michael, who was graduated in 2006 and currently attends Notre Dame Law School; and Kathleen, who is a senior at Notre Dame.