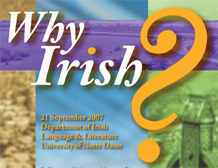 Gearóid Ó Tuathaigh, professor of history at the National University of Ireland, Galway, will discuss the Great Famine and language change in Ireland at the University of Notre Dames annualWhy Irish?colloquium.

The lecture, titledLanguage Change, the State and National Identity in Ireland Since the Great Famine,is free and open to the public and will take place at 3 p.m. Sept. 21 (Friday) in the auditorium of the Hesburgh Center for International Studies.

Ó Tuathaigh is the author ofIreland Before the Famine,Thomas Drummond and the Irish Administration, 1835-1841,Community, Culture and Conflict in Ireland,Éirí Amach: 1798 in Éirínn,andThe Development of the Gaeltacht as a Bilingual Entityand co-author ofThe Age of de ValeraandIrish Studies: A General Introduction.In addition, he is the author of numerous articles in books and journals on many aspects of 19th and 20th century Irish and British history.

A fellow of the Royal Historical Society and former member of the U.S.A.-Ireland Fulbright Commission, Ó Tuathaigh has served as a visiting professor at the University of Toronto, University of Cambridge and New York University and has lectured extensively throughout North America, Australia and Europe.

Why Irish?brings international speakers to campus to examine the role of the Irish language in various disciplines.It is sponsored by Notre Dames Department of Irish Language and Literature.