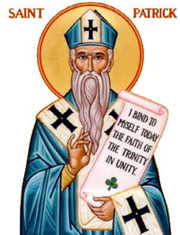 One of the many songs his devotees—at Notre Dame and elsewhere—will be singing on March 17 begins:

Saint Patrick was a gentleman,
And he came from decent people,
In Dublin town he built a church,
And on it put a steeple;
His father was a Gallagher,
His mother was a Brady,
His aunt was an O’Shaughnessy,
And his uncle was a Grady.

Whatever Notre Dame’s founder and first president, Rev. Edward Sorin, C.S.C., thought of Saint Patrick’s manners and ancestry (if he thought of them at all) he certainly gazed down through his pince-nez with disapproval at the Gallaghers, Bradys, O’Shaughnessys and Gradys of this world.

Perhaps because four of the seven brothers who arrived with Father Sorin to found the University were Irishmen, their autocratic superior saw fit to begrudge, in his “Chronicles of Notre Dame du Lac,” that the Irish “are by nature full of faith, respect, religious inclinations, and sensible and devoted; but a great defect often paralyzes in them all their other good qualities: the lack of stability. They change more readily than any other nation.”

As if to illustrate God’s sense of humor, it was Father Sorin’s fate to be first accompanied, soon surrounded, then engulfed, and ultimately overwhelmed by Saint Patrick’s unstable sons and daughters.

Poor Father Sorin. The French religieux struggled manfully at first, forbidding any unusual celebrations on March 17, but there were predictable outbreaks. The gravitas of one such feast day during the 1860s, for instance, was shattered by a student named Tim O’Sullivan, who crept stealthily at daybreak on to the forbidden balcony which ringed the base of the old Main Building dome. He remained beyond disciplinary reach just long enough to awaken the entire campus with a trumpeted rendition of “Saint Patrick’s Day in the Morning.”

Nor could Father Sorin have been very well pleased a few years later when two of his acolytes (their names were Dave O’Leary and John Quinn) defied his March 17 ban of green clothing on campus. Incensed at this affront to their heritage, the two clipped and then divided a green ribbon from the altar missal, pinned the halves to their two surplices and processed into the Sacred Heart sanctuary to serve the founder’s Mass. The outraged Father Sorin hastily ordered the expulsion of O’Leary and Quinn, almost as hastily relented, and revoked his angry decree. O’Leary remained at Notre Dame, but Quinn’s dudgeon had soared even higher than the founder’s, and he stormed away, roaring “By gum! I’ve been fired! And I’ll not stay!”

According to the Notre Dame historian, Rev. Arthur Hope, C.S.C., “Years later, Quinn returned, a fine priest and a noble Monsignor, to deliver the baccalaureate sermon, in what was interpreted as a vindication of the ‘Irish Rebellion.’”

Father Sorin was succeeded in his presidency by the Galway-born Rev. Patrick Dillon, C.S.C., and all his successors thereafter, with the exception of Father Sorin’s nephew, Rev. Auguste Lemmonier, C.S.C., were either born in or substantially descended from Ireland.

Father Sorin died in 1893, mercifully spared the escalating “Hibernification” of Notre Dame athletics, the adoption as moniker of “Fighting Irish” and as mascot of an Irish Terrier named “Clashmore Mike,” and, later, that hyperactive leprechaun.

We can only wonder what Father Sorin must think of his University’s internationally renowned Keough-Naughton Institute for Irish Studies, of the scholarship of such professors as Seamus Deane and Jay Dolan, of the campus hospitality extended over the years to such poets as William Butler Yeats and Seamus Heaney and to such politicians as Eamon DeValera, Garret Fitzgerald, Gerry Adams and Mary Robinson, to say nothing of the numerous other saints, scholars and downright characters visiting here from that unstable nation, and sometimes staying on.

But surely even Father Sorin will approve Notre Dame’s observance of this year’s feast of Saint Patrick, when a Mass will be celebrated at 5:15 p.m. March 17 in the Basilica of the Sacred Heart, on the same site where O’Leary and Quinn defied him. Bishop Daniel R. Jenky, C.S.C., of Peoria, Ill., will preside, and Irish sacred music will be provided by the Notre Dame Folk Choir under the direction of Steven C. Warner.

The Folk Choir will launch its newest recorded collection of Irish sacred music, “Songs of Saints and Scholars,” during a public reception following the Mass at 6:45 p.m. in the Coleman-Morse Center. Neither “Saint Patrick Was a Gentleman,” nor “Saint Patrick’s Day in the Morning” will be featured, but there will surely be Gallaghers, Bradys, O’Shaughnessys, Gradys, O’Sullivans, O’Learys and Quinns on hand.

And, of course, Father Sorin will be, as always, most welcome.