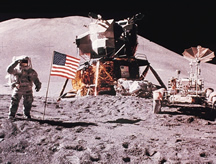 As NASA envisions it, astronauts will return to the moon within the next decade or so. Unlike in the earlier, quick, Apollo visits, these astronauts will build a permanent base and prepare for an historic undertaking that will send explorers to Mars.

As Clive Neal, associate professor of civil engineering and geological sciences at the University of Notre Dame, envisions it, these same astronauts may be in for a shockingand rockingsurprise.

Neal and a team of 15 other planetary geologists have reexamined data from seismometers placed by Apollo astronauts at lunar landing sites from 1969 to 1972. They found that instruments from Apollo missions 12, 14, 15 and 16 consistently radioed back seismic data to Earth until they were turned off in 1977 in a NASA cost-cutting measure.

Neal and his colleagues discovered a surprising number of relatively largemoonquakes,including some that lasted a remarkably long time.

The moon is seismically active,Neal said.When a quake occurs, the moon rings like a bell.

There are four different types of moonquakes. Deep moonquakes, occurring at roughly 700 kilometers below the surface, were most likely caused by lunar forces triggered by the effect of Earths gravity. Other quakes were caused by vibrations from the impact of meteorites, andthermal quakeswere caused when the frigid crust of the moon expanded when struck by the morning sun after two weeks of deep-freeze lunar night. The first three classes of moonquakes were generally mild.

However, shallow quakes, which occurred only 20 or 30 kilometers below the surface, were another story. They were powerful and long-lasting.

Between 1972 and 1977, the Apollo seismic data detected 28 shallow quakes,Neal said.A few of the shallow quakes registered up to 5.5 on the Richter scale. A magnitude 5 quake on Earth can move heavy furniture and crack plaster.

Neal points out that vibrations from most earthquakes cease in less than a minute. The biggest earthquakes stop shaking in less than two minutes. The shallow quakes on the moon produced movement that continued for more than 10 minutes.

Neal and other scientists arent exactly sure what causes the shallow moonquakes, although they suspect that the rims of large and relatively young moon craters may slump and cause them.

They also arent sure precisely where the quakes are occurring.

The Apollo seismometers were all in one relatively small region on the front side of the moon, so we cant pinpoint the exact location of these shallow quakes,Neal said.

Although he isnt sure of the precise location of the shallow quakes, Neal is convinced that NASA needs additional analysis and data before proceeding with construction of a permanent lunar base. In the corner of his office is a floor-to-ceiling bookshelf containing binders of data from the Apollo missions, which he continues to analyze and which, he feels, will offer important guidance for the planned return to the moon.

He notes that we know relatively little about the lunar poles, which is critical given that one suggested location for a lunar base is a region on the rim of Shackleton Crater at the south pole of the moon that is permanently sunlit.

NASA planners also will need to develop building materials that are flexible enough to withstand the stress of shaking and bending from these long-lived shallow moonquakes.

Neal also believes that the moon can offer critical data that will potentially impact the planned missions to Mars.

The moon is a technology test bed for establishing such networks on Mars and beyond,he said.