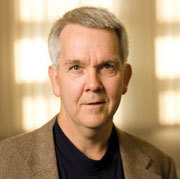 Paul W. Bohn, Arthur J. Schmitt Professor of Chemical and Biomolecular Engineering at the University of Notre Dame, has been named the North American associate editor of The Analyst by the Royal Society of Chemistry (RSC).

Bohns responsibilities as associate editor will include evaluating manuscripts submitted to the journal, identifying qualified reviewers and working with the author(s) and reviewers to address revisions and mediate technical issues while maintaining the standards of The Analyst.

A member of the Notre Dame faculty since 2006, Bohns research interests encompass molecular transport on the nanoscale; the development of optical spectroscopic measurement strategies for surface and interfacial structure-function studies; optoelectronic materials and devices, chemical sensors and molecular approaches to nanotechnology.

Bohn is a member of the American Chemical Society (ACS) and a fellow of the American Association for the Advancement of Science. He also has received numerous awards, including the 2006 Research Team Award from the U.S. Army Construction Engineering Research Laboratory; the 2005 Bomem-Michelson Award from the Coblentz Society, presented to scientists who have advanced the techniques of vibrational, molecular, Raman or electronic spectroscopy in memory of Professor A.A. Michelson, developer of the Michelson interferometer; the 2004 Spectroscopy Society of Pittsburgh Award, which recognizes outstanding contributions in the field of spectroscopy; and the Spectrochemical Analysis Award from the ACS.

Bohn received his bachelors degree in chemistry from Notre Dame in 1977 and his doctorate, also in chemistry, from the University of Wisconsin at Madison in 1981. He joined Bell Laboratories that same year as a member of the technical staff. Most recently, he served as the Centennial Professor of Chemical Sciences at the University of Illinois at Urbana-Champaign.

Committed to raising public awareness of chemistry and the chemical sciences, the Royal Society of Chemistry boasts 43,000 members worldwide and manages an internationally acclaimed publishing business for the education, training and promotion of the sciences.