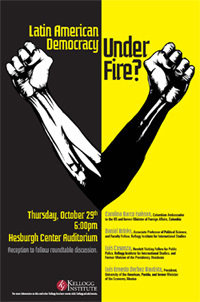 What are the prospects for democracy in Latin America?

“More than a quarter century after democratization swept across the region, many Latin Americans feel democracy does not address their urgent, everyday needs,” says Luis Cosenza, the former minister to the presidency in Honduras.

Three distinguished panelists will join Cosenza to discuss whether Latin American democracy is truly in peril—or if a new, Latin American form of democracy is rising to meet the region’s challenges at a roundtable discussion titled “Latin American Democracy: Under Fire?” at 6 p.m. Thursday (Oct. 29) in the auditorium of the Hesburgh Center for International Studies at the University of Notre Dame. The event is free and open to the public and will be followed by a reception.

Roundtable participants include Carolina Barco Isakson, Colombian ambassador to the United States and formerly her country’s minister of foreign affairs; and Luis Ernesto Derbez Bautista, president of the University of the Americas, Puebla, who previously was Mexico’s economic minister. Cosenza, currently the Hewlett Visiting Fellow for Public Policy at Notre Dame’s Kellogg Institute for International Studies, will serve as moderator and discussant. Rounding out the panel will be Daniel Brinks, associate professor of political science at Notre Dame and a Kellogg Institute faculty fellow, who studies both Latin America and democratization.