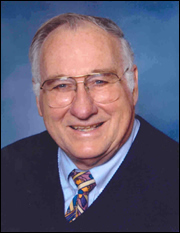 The O’Hara Award, named for Notre Dames 13th president, is conferred annually on a graduate and former employee who has rendered outstanding service to the University.

A 1951 graduate who earned his law degree from Notre Dame in 1955, Roemer returned to the University in 1972 to serve as general counsel.He served as dean of students from 1975 until 1984 when he was appointed director of community relations, a position he held until he retired in 2002.He continues to teach as an adjunct associate professor in theNotre DameLawSchool.

A board member for the local Alzheimers Foundation, St. Margarets House for Women and Children, and CURE (CommUnity Religious Effort), Roemer serves as an advisory board member of five local foundations.He helped found the Dismas House of Michiana and later served on the organizations national board.