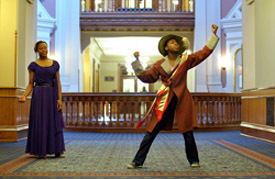 Rayelynn Lee placed first and Indonesia Holt placed second in the elementary division; Paul Ferguson was the top middle school student; and Charell Luckey placed first in the high school competition. Luckey will move on to represent the district at the state competition Feb. 28 in Indianapolis.

This is the second time an RSC participant will participate on the statewide level. Last year, Tirshatha Jeffrey was named second runner-up.
Fourteen RSC members represented grades 3 to 12 in the competition, which featured a total of five elementary school competitors, 18 in middle school and 22 in high school. RSC members, coached by Christy Burgess, the RCLC’s volunteer and performing arts coordinator, have practiced their monologues during each weekly meeting since September.

A 50-member, year-round club, the RSC was founded last year by Burgess and Velshonna Luckey, the RCLC’s associate director of children’s programs, with the help of a grant from the Community Foundation of Saint Joseph County’s ArtsEverywhere Initiative. The company has performed “Macbeth,” “The Comedy of Errors” and “The Merchant of Venice,” as well as outreach scenes for the Notre Dame’s Board of Trustees and Arts and Letters Advisory Board and Art Beat in South Bend.