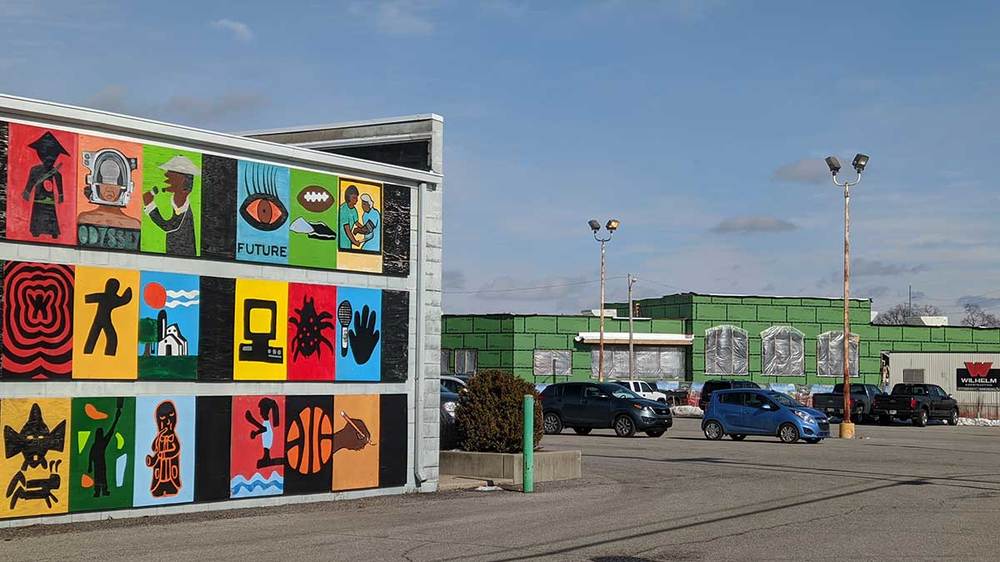 The University of Notre Dame Robinson Community Learning Center (RCLC) will celebrate its 19th birthday — and last one in its original location — with a farewell celebration from 5:30-7:30 p.m. Friday, Feb. 14 at the center’s longtime home at 921 N. Eddy St., South Bend.

“As we prepare for the next chapter, it is important that we take stock and acknowledge the ways in which the Robinson Community Learning Center has grown and expanded over the past two decades, and the people and relationships that have made that possible,” said Jennifer Knapp Beudert, manager of the RCLC. “That’s what this celebration is about.”

A learning center and gathering place for youth and adults, the RCLC opened in a portion of the former shopping plaza at Howard and Eddy streets, two blocks south of campus in the Northeast Neighborhood, in 2001.

It will soon move into a, 12,600-square-foot building across the street, which is under construction as part of Eddy Street Commons Phase II, a $90 million mixed-use development featuring new residential and retail space.

The birthday/farewell celebration will feature remarks from newly elected South Bend Mayor James Mueller as well as current and past RCLC students, staff and volunteers, plus awards and highlights from the past year.

Refreshments will be served, and the public is welcome to attend.

“With the excitement of the move to the new facility, this is a great moment to appreciate the experiences and relationships that have shaped the character of the Robinson Center,” said Jay Caponigro, who oversees the RCLC as director of community engagement at Notre Dame.  “We’re glad to invite the new mayor into our ever-evolving circle of campus and community partners that make this a welcoming environment to learn and grow.”

Planning for the RCLC began under former Notre Dame President Rev. Edward “Monk” Malloy, C.S.C., in 2000, and the center opened in February 2001, quickly becoming a model of mutual engagement between Notre Dame and the surrounding community.

The center is named for the late Renelda Robinson, a community activist who served as director of the Northeast Neighborhood Service Center for nearly two decades.

Designed with input from RCLC students, staff and volunteers as well as Northeast Neighborhood residents, the new building will feature both new and improved spaces, including a “black box” multi-use performance space, a maker space/technology lab, a state-of-the-art early childhood classroom, an industrial kitchen and an outdoor play area.

The one-story building is currently rising at the corner of Howard and Eddy streets. The walls are up, and the windows are going in. The façade is next. Completion is set for spring, followed by move-in over the summer. Programming there, including Take Ten and the Robinson Shakespeare Company, will begin in the fall.

The current center, part of a former A&P that later converted to a Goodwill and Aldi, occupies about 7,500 square feet of space, with no windows and no outdoor space aside from the parking lot. The property is slated for redevelopment as part of a future phase of Eddy Street Commons.

Reflecting on the upcoming move, LuElla Webster, adult programs coordinator at the RCLC, said, “It’s kind of sad. This (the current building) is home, so to say. But we’ve outgrown our space, so I’m ready for the new center, and I think the community is ready too.”

A lifelong resident of the Northeast Neighborhood, Webster was among the group of residents and Notre Dame staff and administrators that developed the original plan for the RCLC, including the idea that it would serve both youth and adults.

Even so, she was skeptical of the project at first.

“At the very beginning, I was the Doubting Thomas of the neighbors,” Webster admitted. “But at a certain point, it became clear that the University genuinely wanted to work with us to improve the neighborhood.”

In hindsight, Webster said, the RCLC “is the best thing that could have happened on the northeast side; better than Eddy Street Commons, to be honest, because it gets the neighborhood involved.”