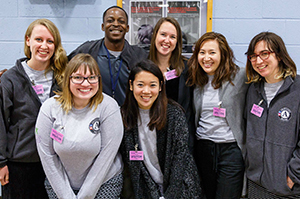 During his speech accepting the Democratic nomination for president in 1992, Bill Clinton sought to try to inspire a new generation of young people the way President John F. Kennedy had inspired him.

“Just think of it,” he told the nation. “Think of it. Millions of energetic young men and women serving their country by policing the streets or teaching the children or caring for the sick. Or working with the elderly and people with disabilities. Or helping young people to stay off drugs and out of gangs, giving us all a sense of new hope and limitless possibilities.”

Clinton’s vision became a reality in 1993 with the creation of the Corporation for National and Community Service (CNCS), a federal agency that engages more than 5 million Americans in service through its core programs — Senior Corps, AmeriCorps, and the Social Innovation Fund. And Clinton’s dream of “new hope and limitless possibilities” is finding full expression today in the University of Notre Dame’s Robinson Community Learning Center (RCLC) AmeriCorps program.

Members can serve in full- or part-time roles. They receive a modest living allowance and an education award that can be used for current or future education. Full-time members also are eligible for health insurance and child care.

Although many AmeriCorps members are recent college graduates doing service during a bridge year, there are actually a range of ages serving, including individuals in their ‘60s.

“In addition to the training they receive, the members get leadership experience by recruiting and supervising volunteers,” Jennifer Knapp Beudert, Robinson Community Learning Center manager, said. “They also become part of a cohesive team through team meetings and bonding activities.”

The RCLC AmeriCorps program was established in 2011 through a grant from Serve Indiana, which administers the program in Indiana. Since its establishment, 116 individuals have served as RCLC AmeriCorps members, serving 2,000 RCLC participants annually.

It is safe to assume that most RCLC members enlist expecting to change lives. Most are surprised that the lives they change include their own.

Reem Hassaen, a member of the 2014-15 RCLC class, served as an ENL (English as a New Language) preschool coordinator.
“I got to know children from the Ukraine, Jordan, Japan, from all over the world,” she said. “The experience changed the way I think about the world.”

Grace Lazarz, a member of the 2015-16 class, who hopes to work as an education director at a theater, is working with the RCLC Shakespeare youth programs.

“I was somewhat familiar with AmeriCorps from family members who served in the program,” she said. “I never expected to have an opportunity to serve in a theater program. I’m learning a lot while bettering the community and myself, working with a unique mixture of kids.”

The RCLC AmeriCorps term of service runs from September 1 through July 31 and team members for the 2016-17 class are currently being recruited. Position descriptions can be found at jobs.nd.edu.