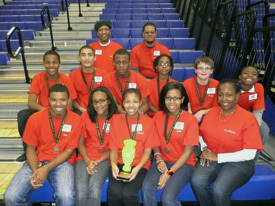 The Robinson Community Learning Center ’s LEGO Robotics team, in only its fourth year, is heading to Mannheim, Germany, to compete in the Open European Championship June 7-9 (Thursday-Saturday).

The team, comprising 10 students ages 10-15 from South Bend area schools, went to Fort Wayne, Ind., in December to participate in the state tournament. Out of 52 teams statewide, the RCLC’s I-Robotics team earned the top prize and the opportunity to travel abroad.

G. David Moss, coach and assistant vice president of student affairs at the University of Notre Dame, is excited for the kids on the team to go to Europe and compete against robotics teams from places as varied as Malaysia and Iceland.

“This experience will fundamentally change these students’ lives,” he says, noting that many of the team members have never been far from South Bend. “Who’d have thought that students from inner-city South Bend would have an opportunity to travel to Europe?”

The I-Robotics team is a part of the FIRST (For Inspiration and Recognition of Science and Technology) LEGO League, affiliated with the nonprofit organization FIRST, an international program that challenges students to develop presentations and design and program LEGO robots. This year’s challenge was to find ways to prevent food contamination.

“The students were charged with researching the various ways food can became contaminated, deciding which type of contamination to address, and coming up with an innovative solution to address that contamination,” Moss says. “They decided to tackle the issue of fish being damaged in transport, and their innovative solution was a gel that could help protect the fish while being transported. Less damage to the fish would mean less bacteria growth, possibly a longer shelf life for the fish, and less waste.”

Moss is pursuing a patent for the team’s solution. “I took the kids with me to see a lawyer,” he says, so they could see what could develop from their hard work.

Moss says the team will be putting together ways to raise funds throughout February. Each student has a certain amount of money he or she has to put in to go. With the team, its coaches and its administrator, Moss anticipates up to 30 people going to Germany to support the team once parents and siblings of the teammates find a way.

“The parents are coming from disparate economic backgrounds,” Moss says. “So we really are trying to be as inclusive as possible. The students, of course, will go on a different budget than the parents.” He hopes the University will contribute to the students’ costs, because “there is a way in which small fundraisers can really become overwhelming.”

The team is planning to go to Germany a few days before the competition to sightsee and get a taste of a foreign culture. Moss is having the members keep journals of their experiences after winning the state tournament, which have included meeting Gov. Mitch Daniels and earning a community award on Martin Luther King Jr. Day.

Founded in 2001 as a community-driven education center sponsored by Notre Dame in partnership with school, religious and civic leaders, the RCLC offers innovative tutoring, violence prevention, youth entrepreneurship and performing arts projects for adults and children in South Bend’s Northeast Neighborhood and beyond.