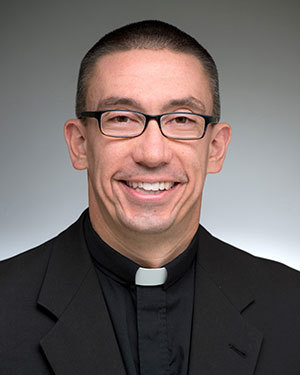 As director of Campus Ministry within the Division of Student Affairs, Father McCormick will oversee a staff of some 30 clerical, religious and lay ministers tending to the spiritual needs of all Notre Dame students. He will replace Rev. James B. King, C.S.C., who has served as director since April 2012, and who will continue as religious superior of Holy Cross priests and brothers at Notre Dame.

“Campus Ministry is central to Notre Dame’s Catholic mission, and I am very pleased that someone with Father Pete’s energy, enthusiasm, administrative skills and dedication to service as a Holy Cross priest will assume the director role,” said Rev. John I. Jenkins, C.S.C., president of the University of Notre Dame. “I want to thank Father Jim King who, in addition to other significant responsibilities at the University, served as director until the ideal person was ready to take over.”

“Campus Ministry’s work is inspired by the charism of the Congregation of Holy Cross to educate the heart and mind of our students,” said Erin Hoffmann Harding, vice president for student affairs. “Father Pete’s outstanding service as a rector, administrator and chaplain has shown his exceptional capability to connect with all students and inspire them to deepen their faith. I am delighted that the Notre Dame community will benefit from his leadership in this crucial role.”

While in the seminary, Father McCormick worked at St. John Vianney Parish in Goodyear, Arizona, directing its Confirmation program, teaching mathematics in the parish school and coaching fifth- and sixth-grade basketball. Returning to Notre Dame, he earned a master’s degree in divinity in 2006 and was ordained a Holy Cross priest the following year. He is currently pursuing an executive MBA degree from Notre Dame’s Mendoza College of Business. From 2007 to 2013, he served as rector of Notre Dame’s Keough Hall. He also served as associate vocation director for Holy Cross from 2007 to 2010. He was appointed associate director of Campus Ministry in 2014, and serves as chaplain to the Notre Dame men’s basketball team.