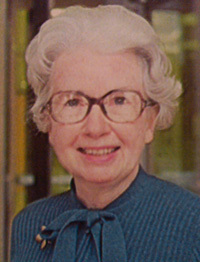 A native of St. Louis, Christman was born in 1914, the oldest of seven children. She grew up in Webster Groves, a St. Louis suburb, and attended Webster College, from which she was graduated in 1935 with an English degree.

Following service as an editorial research officer in the U.S. Navy WAVES during World War II, Christman struggled as a freelance writer before finding a job as a secretary at Harold Ober Associates, the prestigious New York literary agency, in 1946. Quickly promoted from secretary to reader to agent, she worked at Ober for the next 23 years, associating with such literary luminaries as William Faulkner, Pearl Buck and J.D. Salinger. She prized a rare first edition copy of “Catcher in the Rye” signed by Salinger.

Growing restless at Ober and increasingly susceptible to a vocation to teach, Christman took courses at New York University, from which she obtained master’s and doctoral degrees in 1966 and 1972, respectively. In 1968 she began to teach English and creative writing at DePauw University. For six summers between semesters at DePauw, she taught writing to Notre Dame graduate students, finally joining the Notre Dame faculty full-time in 1976.

At Notre Dame, she was immediately popular as a teacher and mentor, and her courses, mostly on professional writing, were so heavily subscribed that students sometimes entered lotteries to gain admission. Drawing on her experiences at Ober, she designed and taught a publishing course, in which students would seek out manuscripts, sign a contract with the author and go through the steps of editing, producing and selling the books.

In addition to her careers in publishing and teaching, Christman wrote numerous short stories and novels, including “Ruined for Life” and “A Nice Italian Girl.” She also wrote poetry, and during the 1978 summer commencement ceremonies at Notre Dame, became the only commencement speaker in the University’s history to address its graduates in verse.

An affectionate tribute to Christman, by her friend and former student, Melinda Hennenberger, editor in chief of the Politics Daily Web site, may be found here.

A memorial Mass for Christman will be celebrated Feb. 27 (Saturday) at 10 a.m. at Holy Redeemer Church in Webster Groves, Mo. A memorial Mass at Notre Dame is being planned and will be announced.

Contributions in Christman’s honor may be made to Friends of Kids with Cancer, 530 Maryville Centre Dr., Ste. LL5, St. Louis, MO 63141.