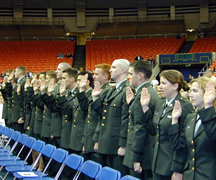 Scully retired in 1996 as the Commanding General of the 102 nd U.S. Army Reserve Command, which, at one time, served more than 5,500 reserve soldiers in 60 units throughoutMissouri.

Scully entered the Army in 1964 through ROTC as an adjutant general corps officer.In 1966 he became assistant chief of the Fifth Army Officer Distribution Branch and in 1967 was deployed toVietnamwith the 38 th Base Post Office.He entered the reserves in 1968.

Currently a group senior vice president for ABN AMRO, Scully is responsible for human resources services for the LaSalle Banks commercial lending and corporate staff.He is a member of the Notre Dame Alumni Board and a past president of the Notre Dame Club ofChicago.

Sixty-two officers from Notre Dames ROTC unitsthe Army, 16; the Air Force, 19; the Navy, 24; and the Marines, 3will be commissioned.