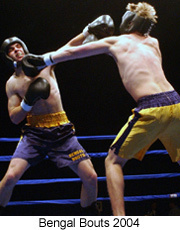 A new study conducted at the University of Notre Dame suggests that amateur boxers who participate in well-monitored bouts are unlikely to experience a decline in brain function.p. Led by Dr. James Moriarity, chief of medicine at Notre Dame, the study of participants in the University’s annual Bengal Bouts competition was published in the most recent issue of the journal Neurology.p. Though the risks of brain damage in professional boxing are well known, Moriarity and six colleagues found that most Notre Dame students who fought in the Bengal Bouts did not show signs of a decline in mental abilities after their competitions.p. Unlike professional fighters, Bengal Bouts participants and most other amateur boxers wear protective headgear. In addition, amateur bouts typically are shorter than professional fights.p. Moriarity believes that when proper precautions are taken, amateur boxing can be a relatively safe sport.p. I am not an apologist for the sport of boxing, nor do I wish to assert that all boxing is a safe sport,Moriarity said in a Reuters News Service story.(However,) I will say that amateur boxing, if conducted in a medically supervised and closely controlled environment, can be a relatively safe undertaking for its participants.p. Moriarity, who has worked as a ringside physician at the Bengal Bouts for 17 years, added that he washappily surprised by the results of the study.p. Eighty-two boxers took part in the study, which included a test of cognitive skills before the tournament and then again after each bout. A control group of 30 students who were not participating also took part in the testing. The testing measured simple and choice reaction time, working memory, and learning. None of the subjects had a history of recent concussion or past history of brain injury.p. With the exception of boxers whose contest is stopped by the referee, amateur boxers participating in multiple bouts during a seven-day tournament display no evidence of cognitive dysfunction in the immediate post-bout period,the researchers concluded.p. Among boxers whose matches were stopped, but who did not have a concussion, reaction times were slower after their bouts. Boxers who experienced nosebleeds also were slower in testing after fights.p. The research concludes that short-term impairment is unlikely, but Moriarity stresses that more research is needed to determine the long-term consequences of boxing.p. Dr. Patrick Leary, a physician in University Health Services at Notre Dame, is among the co-authors of the study.p. Moriarity and Leary are both board certified in family medicine and sports medicine and care for students at Notre Dame under the auspices of Student Affairs. They also provide sports medicine coverage to Fighting Irish athletics teams.p. The Bengal Bouts began at Notre Dame in 1931 and this year featured more than 140 boxers. Proceeds from the event support the work in Bangladesh by the Congregation of Holy Cross, Notre Dame’s founding order.p. _Contact: Dr. James Moriarity, 574-631-7567 or moriarity.1@nd.edu _