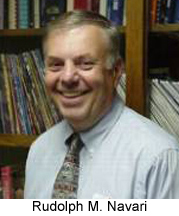 Since the mid-1990s, a drug called olanzapine has been used to treat schizophrenia and other psychoses.p. Now, a team of scientists led by a University of Notre Dame cancer researcher has found a new use for the drug that may make chemotherapy treatments far less onerous.p. Rudolph M. Navari, director of Notre Dame’s Walther Cancer Research Center, led a team of researchers from the Indiana University and University of Kentucky Medical Schools and the Walther Cancer Institute’s Hoosier Oncology Group in a study of the use of olanzapine for the control of chemotherapy-induced nausea and vomiting. The study demonstrated that olanzapine, which carries the brand name Zyprexa, was very effective in preventing the common and feared side effects in patients receiving various types of chemotherapy.p. When olanzapine was added to the standard mix of drugs used to relieve nausea and vomiting given to patients prior to receiving chemotherapy, there was essentially no nausea or vomiting in the 24-hour period following treatment. Olanzapine also prevented nausea and vomiting during the week after chemotherapy if it was given daily for two to five days.p. Olanzapine is currently FDA-approved to treat various psychoses, such as schizophrenia. It also has been used recently to control nausea induced by opioids (opium-based drugs). The Navari study, however, is the first demonstration of olanzapine’s effectiveness in patients receiving chemotherapy treatments.p.