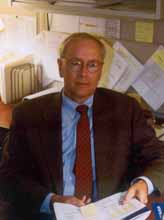 Surprisingly, given the vast amount of information astrophysicists have uncovered about planets, the exact process by which they form remains a mystery. A new study by a team of researchers led by University of Notre Dame astrophysicists Terrence Rettig and Dinshaw Balsara may help solve that mystery.

Obviously, we know this process happens, but no one can fully explain the details of the process of planet building,Rettig said.From our own solar system and the observations of the variety of other planets around more distant stars, we have indirect clues as to how the gas and dust that remains in a fully extended disk surrounding young stars might coagulate into larger and larger bodies to form a planet and, eventually perhaps, life.

Unless something disrupts this process, they can coalesce in about a million years to form what we now refer to as the cores of rocky planets, like Venus, Earth and Mars,Rettig said.Over the next few million years, if the core is two to three times larger, it is thought that it might have sufficient gravity to attract large quantities of the cold gas in the disk to form what we know as the giant gas planets, Saturn and Jupiter. In this standard accretionmodel, gas giants may take as much as 10 million years to form.

What the current theories of planet formation have lacked are observations that explain how the gas and dust settles to the midplane of the young disk and how it can be dense enough in the midplane to form planetesimals and eventually planets.

This process can only take place when the star is very young and is shrouded with a thick layer of dust,Rettig said.This is because when the young protostar finally becomes a star, the energy is sufficient to remove all the remaining gas and dust that remains in the planet-forming regions of the disk, ending any chance of planet formation. It is only when the micron-sized dust particles can settle to the midplane that they can grow larger and larger to eventually form a planet, and this must occur in the time available before the star clears out the planetary disk of all its planet-building material.

In their new paper, Rettig and other researchers provide the results of a unique set of observations of young disks surrounding protostars where the gas and dust that compose the young disk are very likely in the midst of forming planetesimals and, perhaps, protoplanets and planets.They used the worlds largest optical telescope, the Keck atMauna Kea,Hawaii, to obtain very high resolution infrared spectra of four young stars that allowed a measure of the line of sight gas column densities and compared them to the dust densities. Using observations of a number of young disks at different inclinations, the researchers were able to show how the gas to dust ratio varies according to the angle of inclination to the observers line of sight.

Essentially, the gas-to-dust ratio provides a measure of the rate of dust settling and grain coagulation in these extended disks,Rettig said.The results enable us to present a simple model for dust settling and grain growth and, importantly, turbulence. Effectively what we are measuring in these young disks is the gas to dust ratio along a line of sight and, subsequently, the amount of turbulence in the disk midplane. The midplane turbulence is critical to the formation of planetesimals: if it is very turbulent, then it is unlikely that sufficient numbers of particles can settle and stick together to form planetesimals.

Rettig and the other researchers point out that the study is a first step and additional observations and additional analysis are needed. They believe, however, that theorists can use their implications for turbulence to better understand the process of planetary formation.

The study appears in the July 20 edition of Astrophysical Journal. The papers coauthors are David Tilley of Notre Dame; Sean Brittain, Clemson University; Ericka Gibb, University of Missouri-St, Louis; and Ted Simon and Craig Kulsea from observatories in, respectively, Hawaii and Arizona.