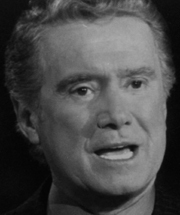 Television personality Regis Philbin, a 1953 graduate of the University of Notre Dame, will appear Oct. 24 and 25 (Sunday and Monday) at the University’s new Marie P. DeBartolo Center for the Performing Arts (PAC), for a concert and a live television broadcast of his talk show “Live! With Regis and Kelly.”

Philbin also will speak at the pep rally on the eve of the Notre Dame-Boston College football game Oct. 22 (Friday) at 6 p.m., and at the kickoff luncheon that day at noon. Both events will be held in the Joyce Center.p. p. The concert, which will be held at 6 p.m. Oct. 24 in the PAC’s Leighton Concert Hall, will feature Philbin, backed by a 22-piece orchestra, singing selections from his newly released CD, “When You’re Smiling.” Between songs, he will share stories about his career and his long-standing relationship with the Center for the Homeless in South Bend.p. Admission for the concert is $30 for the general public and $100 for preferred seating in support of the Center for the Homeless. Tickets are available by calling 574-631-2800.p. The television broadcast, which will begin at 7:30 a.m. Oct. 25 in the Leighton Concert Hall, will be open to a limited number of Notre Dame students and guests. Concert-goers who purchased preferred seating for the previous evening’s event will be guaranteed admission to the broadcast.p. Philbin’s “Live!” co-host, Kelly Ripa, will remain in New York for the broadcast, which will include various live and taped segments featuring Philbin interacting with Notre Dame students and revisiting his beloved alma mater.p. A veteran of nearly four decades in entertainment, Philbin has been nominated for numerous Emmy Awards and was honored with a Daytime Emmy for his role as host of the popular game show “Who Wants to Be a Millionaire?” He received an honorary doctor of laws degree from Notre Dame in 1999 in recognition of his previous gifts to the University in support of scholarships, as well as his service as host of an annual fund-raising broadcast on behalf of the Center for the Homeless. He also made a $2.75-million contribution to the PAC for a studio theater in his name.p. Philbin and his wife, Joy, are the parents of two daughters, Jennifer, a 1996 Notre Dame graduate, and Joanna, a graduate of the University’s Law School.p. _Contact: Tom Barkes, director of audience development, PAC, 574-631-5956, tbarkes@nd.edu _ p.