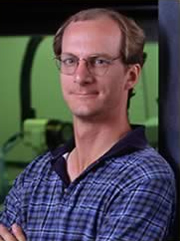 The recent discovery of a new class of materials by researchers at Notre Dame and Argonne Laboratories exemplifies the Universitys ability to advance scientific research through regional partnerships with state- and federally-supported agencies.

Peter Burns, chair of Notre Dame department of civil engineering and geological sciences, has been the lead researcher in the discovery of materials called actinyl peroxide compounds. The materials self-assemble into nano-sized, hollow cages that could have useful new electronic, magnetic and structural properties important to the emerging world of nanotechnology.

He is one of a dozen Notre Dame scientists and engineers doing groundbreaking research withArgonne, a Department of Energy institute that explores the basic science of molecular interactions involved in the transport of nuclear materials in the environment.

The multiple collaborations between the institutions involve a breadth of interactions, including radiation physics, nuclear physics, astrophysics, environmental research, materials research and high-speed computing, according to Tony Hyder, associate vice president of graduate studies and research. Collaborations date back many decades and grow exponentially, with Notre Dame andArgonnenow partnering to build extremely high-speed data exchange systems over the Internet and to construct a billion-dollar accelerator.

In addition to granting access to research equipment that would be unaffordable to a single institution, the relationship gives Notre Dame graduate studentsaccess to great scientists and engineers both there and on our faculty,Hyder says.

In Burnscase, research on the compounds began in Notre Dames Environmental Molecular Science Institute (EMSI) in Fitzpatrick Hall. Aspects of the project moved to ArgonnesDuPage County,Ill., facility because its chemistry division has hot labs that enable research on neptunium to be performed safely.Argonnes Advanced Photon Source, the hemispheres most brilliant source of research X-rays, was also used analyze the solution.

Burnswork, withArgonnechemist Lynda Soderholm, continues and portends important future findings.No one has ever seen anything like these,says Burns.These very small nanoscale aggregates of actinides in solution could play an important role in actinide transport in the environment.Actinides are the radioactive elements that constitute the bottom row of the periodic table. The chemistry of these elements is drawing increased interest from scientists.

Since there are no historic examples, there is a huge void in understanding, so we are investigating almost any situation we think could be found in nature related to nuclear materials interacting with the environment,adds Soderholm.

Burns and Soderholm feel that these actinyl-nanospheres may form in alkaline mixtures of nuclear waste, such as the high-level nuclear waste tanks found at aHanford,Wash., site.Hanfords nine nuclear reactors produced plutonium for four decades, leaving more than 50 million gallons of high-level liquid waste in 177 storage tanks and billions of gallons of contaminated groundwater.

If these actinyl-nanospheres are forming atHanfordand other sites, such as the Savannah River plant inSouth Carolina, we should know about it and understand more about it,Burns says.