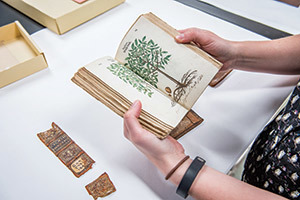 Rare books conservator Sue Donovan holds a rare herbal book by 16th-century German physician and botanist Leonhart Fuchs, part of the Edward Lee Greene collection. In 2012, it was discovered that the book had spine linings of parchment manuscript waste used to bind the book, including an extremely rare medical text by Constantinus Africanus (Constantine the African), an 11th- century physician and Benedictine monk from North Africa who spent the last part of his life in Italy.

Conservators discussed with the curators what to save and how to save it. The parchment pieces have been removed and photographed for documentation, and the book will then be reassembled. “It’s been a wonderful project — the fragments have value, so we photographed them, put them back and documented the process,” says Donovan. There are three different texts represented in the parchment found in the book.

Says rare books curator David Gura, “It’s essential to have a top-notch conservation staff to preserve our collections for posterity, keeping them usable and accessible. We’re very fortunate to have the conservators here.”

Donovan completed her undergraduate studies at the  University of Chicago and holds a master’s in conservation from the Université de Paris 1 Panthéon-Sorbonne. She joined the University as a Samuel H. Cress Fellow in 2015 and was recently extended as a rare book conservator through July 2017.

Notre Dame Stories: What's going on with the mail?