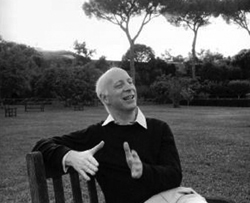 Paul Goldberger, architecture critic for The New Yorker, will give a talk titled “Why Architecture Matters” at 4:30 p.m. Monday (Oct. 26) in 104 Bond Hall at the University of Notre Dame School of Architecture. The event is free and open to the public.

A Pulitzer Prize-winning journalist, Goldberger has written The New Yorker’s celebrated “Sky Line” column since 1997. He began his career at The New York Times, where in 1984 he received the Pulitzer Prize for distinguished criticism.

He is the author of many books, including “Why Architecture Matters” and “Building Up and Tearing Down: Reflections on the Age of Architecture,” both published this year. His talk will address material presented in these books. Copies of each will be available for purchase.

Goldberger lectures widely on architecture, design, historic preservation and cities. He currently is at work on a PBS program about the architect Benjamin Latrobe. Goldberger also serves on the jury for the Driehaus Prize at Notre Dame, a $200,000 award given yearly to a top practicing classical architect.