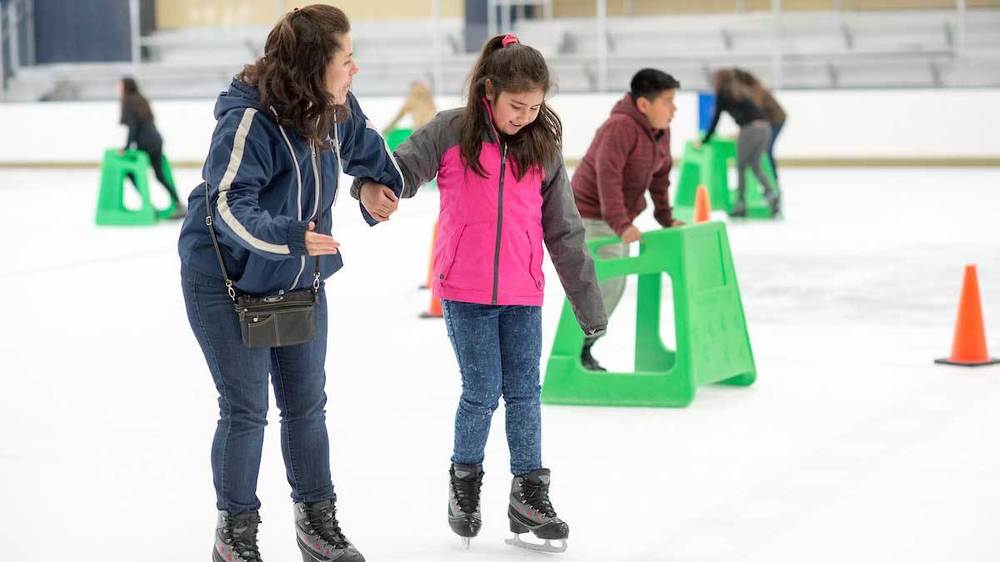 Matthew Furnas addressed the group of third-graders from a set of bleachers near the top of Compton Family Ice Arena, the vast expanse of the 4,500-seat stadium — home to the University of Notre Dame men’s hockey team — providing for a dramatic backdrop.

The kids, from Lincoln Primary Center in South Bend, were finishing up lunch, and Furnas was providing an outline for the rest of the day, including a visit to the video room below the concourse for a lesson about fitness, nutrition and health and, finally, about 45 minutes on the ice — all part of “Experience the Ice,” a health and recreation program for local schoolchildren.

First, however, the kids needed to pick up a T-shirt from a nearby table, said Furnas, community outreach coordinator for Compton Family Ice Arena, adding, “You get to keep the shirt.”

Now in its fifth year, Experience the Ice has provided opportunities for thousands of local schoolchildren to visit Compton Family Ice Arena, learn about healthy living in line with state educational standards and, well, experience the ice.

The Lincoln students visited March 21 (Wednesday), accompanied by faculty and staff from the school.

“We love this trip,” said teacher Sherri Studebaker. “And the kids love it too.”

Despite growing up in the Upper Midwest, many of the students who participate in the program have never ice skated before, Studebaker said. Some have never visited campus.

Like many South Bend Community School Corp. schools, Lincoln is a low-income school, as indicated by its Title I status. The majority of students qualify for free or reduced lunch, a useful indicator of the relative number of families in poverty there. Notre Dame is another world.

“A lot of them have never been (to Notre Dame) even though they live in South Bend,” Studebaker said. “So it gives them a glimpse of what’s out there, education-wise, and what they might be able to do in the future.”

It also offers a more “high-energy” experience than a typical off-campus visit to the symphony or a museum, she said.

Situated on the southern edge of campus, the $50 million Compton Family Ice Arena opened in 2011. Experience the Ice arrived two years later, a response by staff to frequent requests from local schools to use the state-of-the-art facility on weekdays.

“We had school groups wanting to use the ice during the noon hour when we have public skating,” Furnas said. “So it just evolved from that to, well, can we do more? Is there some sort of program we can offer?”

Five years later, “just about every student who comes in really enjoys the program,” Furnas said. “And we try to be as welcoming as we can while creating a safe environment for the kids.”

Arena staff accompany the kids on the ice, Furnas said, and there are plastic “skate aids” for beginners.

Beyond education and recreation, the program addresses one of the primary barriers to ice skating for many families: cost.

Students pay just $3 each for skate rental, Furnas said, and Royal Excursion provides transportation to and from campus as a sponsor of the program alongside This Counts, a community health, wellness and nutrition initiative spearheaded by Notre Dame, Saint Joseph Health System and Meijer.

“A lot of our (community skating) programs are affordable,” Furnas said, “But there’s still an economic barrier to a lot of ice sports generally.”

Often, he said, that leads to misunderstandings about the ice.

Personally, Furnas said, “It’s just a really nice opportunity to give the kids an experience they probably wouldn’t get otherwise, and to be there when they’re doing that for the first time. It’s something we all here at (the arena) really enjoy doing.”

Athletes in Pass It On program teach children leadership, sportsmanship