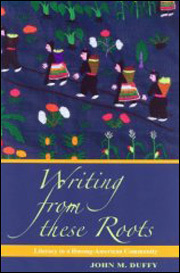 A new book by John Duffy, associate professor of English at the University of Notre Dame, documents the historical development of literacy in a midwestern American community of Laotian Hmong who came to the United States as refugees from the Vietnam War.

Published by the University of Hawaii Press,Writing from These Rootsdraws on interviews with Hmong refugees in a Wisconsin community, whose culture lacked an accepted written form of language until the late 20th century when missionary-linguists created one that was adopted by Hmong in Laos and later in the U.S.

Often described aspreliterateornonliterate,the Hmong provide a unique opportunity to study the political, economic and military forces that influence reading and writing. Duffys book sheds light on those forces within a culture that has acquired written language for the first time in its history.

A faculty member in the Department of English since 1998, Duffy also serves as the Francis O’Malley Director of the University Writing Program. He specializes in literacy, rhetoric and literature.