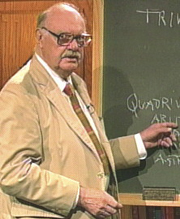 Otto A. Bird, the founder and first director of the General Program of Liberal Studies at the University of Notre Dame, died Friday (June 5). He was 94 years old.

Bird came to Notre Dame in 1950, invited by Rev. John J. Cavanaugh, C.S.C., then the University’s president, to establish a program of studies which would avoid narrow academic specialization while exposing students to the so called “Great Books,” the most important and formative intellectual products of Western civilization and thought.

Bird was ideally suited for such work. He had studied at the Universities of Michigan and Chicago, at the latter of which he had been involved with the heady educational experiments of philosophers Mortimer Adler and Robert Hutchins, and he had earned a doctoral degree while studying under the French Thomist philosopher Etienne Gilson at the Institute of Mediaeval Studies in Toronto. His dissertation concerned the medieval Italian poet Guido Cavalcanti, and it gave rise to a correspondence between Bird and the poet Ezra Pound. In addition to their shared interest in Cavalcanti, they mutually explored ideas on the philosophy of education as shaped by Dante, Milton, Aristotle, Confucius, and others.

A popular, even revered teacher at Notre Dame, Bird balanced his course load and administrative responsibilities with a lively career of scholarship, publishing such philosophical works as “Syllogistic,” “The Idea of Justice,” and “Cultures in Conflict: An Essay in the Philosophy of the Humanities.” He also was a member of the committee which planned the innovative 15th edition of the Encyclopedia Britannica, and especially its introductory volume on the organization of knowledge.

In his autobiography, “Seeking a Center: My Life as a ‘Great Bookie,’” Bird described his personal search for truth, and how he made use of methods learned from Gilson and Adler to rediscover the philosophy of St. Thomas Aquinas, which eventually led him to the Catholic Church. That search was, in the words of his Notre Dame colleague, Ralph McInerny, “the journey of an intellect, of a soul, that puts before the reader a vision of the intellectual life one wishes were more palpably present in Catholic colleges and universities than it is nowadays.”

A funeral Mass was celebrated for Otto Bird today in the Basilica of the Sacred Heart, and much of the liturgy was sung in Latin. In his homily, Bird’s friend and colleague, Rev. Nicholas Ayo, C.S.C., professor emeritus in the Program of Liberal Studies, spoke of Bird’s love of the language, and how he kept the Latin versions of the liturgical readings by his bedside as he died. Apologizing to his departed friend for his English translation of it, Father Ayo then read, in Latin, the ancient poem, “Veni, Sancte Spiritus,” the so called “Golden Sequence” of the Mass for Pentecost, and widely regarded as one of the greatest masterpieces of sacred Latin poetry ever written.

Bird’s body was then taken to Cedar Grove cemetery for burial.