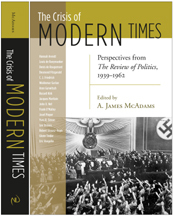 The Crisis of Modern Times: Perspectives from The Review of Politics, 1939-1962,edited by Notre Dame political scientist A. James McAdams, was recently published by Notre Dame Press.

The Review of Politics was founded at Notre Dame in 1939, during the presidency of Rev. John F. OHara, C.S.C., who had welcomed into the faculty several prominent European intellectuals who had fled to America from the spiritual and intellectual stultification of European fascism.Under the editorship of one of these émigré scholars, the political philosopher and historian Waldemar Gurian, the new publication became central to a community of thinkers understandably convinced that the West had lost its moral bearings and could not regain them without rediscovering what the French philosopher Jacques Maritain calledintegral humanism.

According to Timothy Fuller, Worner Distinguished Service Professor at Colorado College,the Review of Politics has been essential reading for students of political philosophy and politics for more than two generations, including among its contributors internationally renowned scholars whose works are both enormously influential and increasingly look to be contemporary expressions of perennial wisdom. To make seminal essays of this remarkable journal easily accessible, with more to come in future volumes, is a great service to students of political science at every level.

McAdams, who joined the Notre Dame faculty in 1992, is the William M. Scholl Professor of International Affairs and director of the Nanovic Institute for European Studies.He teaches and writes extensively on comparative and international politics, political history, and law and technology.He also is the author of several books, includingJudging the Past in Unified Germany,Germany DividedandEast Germany and Détente.