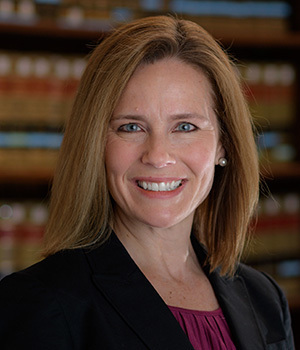 Amy Coney Barrett, Diane and M.O. Miller II Research Chair in Law and Professor of Law at the University of Notre Dame, was nominated Monday (May 8) to the U.S. Court of Appeals for the 7th Circuit by President Donald Trump.

“Amy is an outstanding professor, scholar and colleague,” said Nell Jessup Newton, Joseph A. Matson Dean and Professor of Law at Notre Dame Law School. “She will be an excellent judge.”

Barrett teaches and researches in the areas of federal courts, constitutional law and statutory interpretation. Her scholarship in these fields has been published in leading journals, including the Columbia, Virginia and Texas Law Reviews.

From 2010 to 2016, she served by appointment of the Chief Justice on the Advisory Committee for the Federal Rules of Appellate Procedure. She has been twice selected by students as “Distinguished Professor of the Year.”

Before joining the Notre Dame faculty in 2002, Barrett clerked for Judge Laurence H. Silberman of the U.S. Court of Appeals for the D.C. Circuit and for Associate Justice Antonin Scalia of the United States Supreme Court. As an associate at Miller, Cassidy, Larroca & Lewin in Washington, D.C., she litigated constitutional, criminal and commercial cases in both trial and appellate courts.

She and her husband, Jesse Barrett, Law School class of 1999, have seven children.