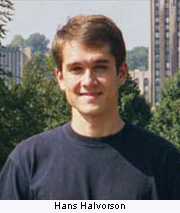 Hans Halvorson, assistant professor of philosophy at Princeton University, has been awarded the University of Notre Dames inaugural Cushing Memorial Prize in the History and Philosophy of Physics.p. The $1,000 prize is in memory of James T. Cushing, a longtime professor of physics and philosophy at Notre Dame, and is awarded for significant new work by young scholars in the field. It is administered by Notre Dames John J. Reilly Center for Science, Technology, and Values and the Graduate Program in History and Philosophy of Science.p. Halvorson, who accepted the award Sept. 3, was honored for his paper titled “Reeh-Schlieder Defeats Newton-Wigner: On Alternative Localization Schemes in Relativistic Quantum Field Theory,” published in 2001 in the journal Philosophy of Science.p. A 1995 graduate of Calvin College, Halvorson earned masters degrees in philosophy and mathematics and a doctorate in philosophy from the University of Pittsburgh. He has been a member of the Princeton faculty since 2001.p. Cushing joined the Notre Dame faculty in 1966 and specialized in the history and philosophy of modern physics and the foundations of quantum mechanics. He died March 29, 2002, at age 65.p. More information is available on the Web at www.nd.edu/~cushpriz/ p.