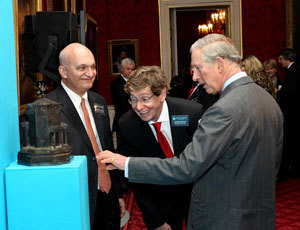 His Royal Highness Charles, Prince of Wales, accepted The Richard H. Driehaus Prize at the University of Notre Dame Patronage Award during a ceremony Jan. 27 at St. James’s Palace in London.

The Prince is a forceful advocate for the maintenance of traditional building skills and sustainable urban design and is keenly interested in how the built environment affects the quality of people’s lives. The Prince’s Foundation for Building Community, a charity established personally by His Royal Highness, has led building and planning efforts in more than 62 communities in the United Kingdom along with the United States, Africa and Asia.

He received a bronze miniature of the Tower of the Winds and donated the $150,000 prize to his foundation to establish an undergraduate diploma course in sustainability and the building arts, as part of the charity’s building-skill program. “It is an element of education that I’ve long been desperate for my foundation to reintroduce,” Prince Charles said at the ceremony, “and I’m thrilled that, thanks to the incredible kindness of the Driehaus Foundation, it will be able to do so.”

The Prince of Wales’ efforts to create more sustainable and liveable communities, with an emphasis on putting people’s needs at the center of the building and urban design process, dates back more than two decades. On land owned by the Duchy of Cornwall in southern England, the Prince established the town of Poundbury in the early 1990s based on a master plan by architect and inaugural Richard H. Driehaus Prize laureate Léon Krier. Poundbury is a New Urbanist town notable for its high-density, mixed-use development, including homes and businesses built with traditional methods and sustainable local materials, including the market hall designed by British architect John Simpson.

The Patronage Award is the first of its kind presented through the Richard H. Driehaus Prize at the University of Notre Dame, now in its 10th year. The Patronage Award is a one-time honor to recognize the Prince’s tireless commitment to traditional architecture and sustainable urban design.

“Prince Charles has put the ideals of traditional architecture and urban design into practice around the world,” said Michael Lykoudis, the Francis and Kathleen Rooney Dean of the University of Notre Dame School of Architecture, who presented the award along with Richard H. Driehaus. “The inspiring results — from Haiti to the Alder Hey Children’s Hospital in Liverpool, from China to the Galapagos Islands — illuminate the power of those ideals to create a more vibrant, beautiful and sustainable built environment.”