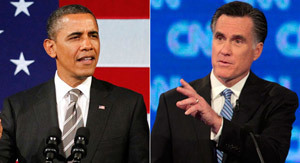 The University of Notre Dame’s president, Rev. John I. Jenkins, C.S.C., and student body president Brett Rocheleau have joined in inviting both President Barack Obama and Republican presidential nominee Gov. Mitt Romney to speak at the University during the fall election campaign.

Continuing a long-standing tradition, Father Jenkins and Rocheleau addressed letters to each of the presidential aspirants, offering Notre Dame as a “forum for serious political discussion” on important issues facing the nation. The intent of the invitations, which include the candidates’ running mates, is to provide the campus community a firsthand impression of the contenders and their messages.

The tradition of election-year invitations to presidential and vice presidential candidates was established 60 years ago by Rev. Theodore M. Hesburgh, C.S.C., in his first year as Notre Dame’s president. That year, both Dwight Eisenhower and his Democratic opponent, Adlai Stevenson, spoke at the University.