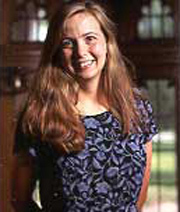 Nicole Stelle Garnett, associate professor of law in the Notre Dame Law School, has been appointed to the National Prison Rape Reduction Commission by President Bush.p. Established last year under the Prison Rape Elimination Act, the nine-member commission will study the phenomenon of prison rape in federal, state, county and municipal prisons and propose national policies and standards to protect prisoners from it.p. Joining Garnett on the commission will be Notre Dame trustee and benefactor John A. Kaneb, chairman and chief executive officer of Gulf Oil.p. Garnett was graduated from Stanford University in 1992 and earned a law degree from Yale University in 1995. Before joining the Notre Dame faculty in 1999, she worked as a staff attorney at the Institute of Justice, a nonprofit, public interest law firm in Washington, D.C. She also served as a law clerk for Supreme Court Justice Clarence Thomas from 1998 to 1999.p.