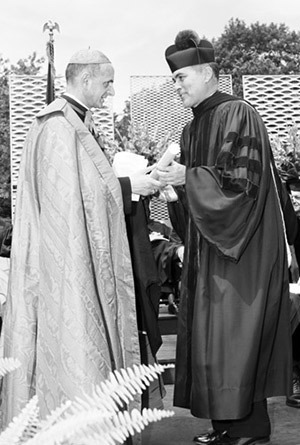 The two-week Synod on the Family in Rome will come to a significant conclusion Sunday (Oct. 19) with the beatification of Pope Paul VI.

Both Pope John XXIII, who preceded Giovanni Battista Montini in the papal office, and Pope John Paul II, who succeeded him, are canonized saints, and on Sunday, when he receives the title “Blessed,” the canonization of Pope Paul VI will be only a matter of time.

The beatification will be an occasion to acknowledge and celebrate the witness of a pope who served and steered the Church through the tumultuous and difficult years in the wake of the Second Vatican Council, but for Notre Dame’s president emeritus, Rev. Theodore M. Hesburgh, C.S.C., it also will be an occasion to enjoy the honoring of an old friend.

When the subject came up during lunch yesterday at Holy Cross House, Father Hesburgh’s shared his delight with his tablemates. “It’s just wonderful, isn’t it? He was such a good guy.”

Father Hesburgh was a seminary student in Rome when Pope Pius XI died in 1939, and over the subsequent years of his career he came to know and meet frequently with four of that Pope’s successors. Nevertheless, “of all the Popes, I knew Paul VI the best,” Father Hesburgh recalls in his autobiography “God, Country, Notre Dame”. They met when Cardinal Giovanni Montini was serving as archbishop of Milan and Vatican secretary of state “and I was just getting into the swing of things as the president of Notre Dame. I found him to be a very intelligent, saintly, complex person. Over a period of several years we became friends.”

According to Father Hesburgh, his most pleasant memory of that friendship was the time they were able to spend together during commencement week at Notre Dame in 1960, where he had invited then-Cardinal Montini to preside at the Baccalaureate Mass and to receive an honorary degree, along with President Dwight D. Eisenhower and the medical missionary Dr. Thomas A. Dooley.

Cardinal Montini’s English was rusty, but Father Hesburgh’s Italian was still fresh, and the two men spent several hours in conversation on long walks around the campus. “He loved the campus and insisted on seeing all of it,” Father Hesburgh said. “At each residence hall he would go into the chapel to say a quick prayer. From the time he spent in each place, I figured him to be a three-Hail Marys man.”

It was during one of these walks that the two paused at the rim of a vast excavation which was to become the foundation of the present Hesburgh Library, and the conversation turned to Cardinal Montini’s favorite library, the Biblioteca Ambrosiana in Milan. “I told him how much we would like to microfilm the Ambrosiana collection and make it available to the world, and he promised to try to arrange it,” Father Hesburgh remembers, “and that is how we happen to have the Ambrosiana Microfilm Collection in our library.”

For Notre Dame, perhaps the most significant impact of the friendship of Father Hesburgh and Pope Paul was the establishment of the University’s Tantur Ecumenical Institute, which Father Hesburgh frankly called “the brainchild of Paul VI.”

In April of 1963 during a luncheon conversation in Rome, Pope Paul told Father Hesburgh that one blessing of the Second Vatican Council then in session was the presence of so many theologians and clergy from all the branches of Christianity. The experience had deepened Pope Paul’s longing for Christian unity, he told his friend, and it had brought him to a decision: “He would build a permanent ecumenical institute, and he would build it in Jerusalem,” Father Hesburgh recalled. “When he finished telling me all this, the Pope smiled benignly at me and said, ‘It would be nice if you could take on the responsibility for this ecumenical institute for me.’”

Soon afterwards, the Vatican purchased some property on a hilltop between Jerusalem and Bethlehem and leased it to Notre Dame. Father Hesburgh went to work and now, a facility with more than 50 guest rooms, 10 apartments, a large auditorium and one of the finest theological libraries in the Holy Land has become a center for theological scholarship and a gathering place for scholars and students of all faiths. More than 5,000 Orthodox, Protestant, Anglican and Roman Catholic scholars and religious have lived, studied and prayed there.

Father Hesburgh remembers Pope Paul VI once calling Notre Dame “my favorite Catholic university.” He has much to celebrate when his friend is honored this Sunday, and so does the university they both have loved.