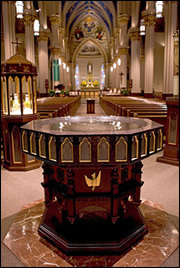 Though Pope John Paul II never visited Notre Dame, he did honor the University by making an important change to one of its major landmarks.

In conjunction with Notre Dames 150 th anniversary, John Paul designatedSacredHeartChurcha minor basilica in January 1992. It became the 37 th minor basilica in theUnited States; there are just four major basilicas, all inRome. The honor is reserved for historically important churches or significant centers of worship and devotion.

A letter of record issued by theVaticanread in part:We understand that this well known temple traces its foundation even to the 17 th century; we are well aware that this church is an outstanding testimony to the widespread labor of missionaries as well as to their resourcefulness. In addition, this churchs adornment bears witness to the fervor of the faith of the people and to the diligent care which they have given to this temple.

We know that the pleasant harmony of (Americas oldest) carillon repeatedly resounds from Sacred Heart. We hope that its sound will not only calm and gladden human hearts, but that it will also call those who hear it to faith and Christian truth and that it will stir their spirits.

The letter was signed on behalf of John Paul by Cardinal Angelo Sodano,Vaticansecretary state, and carried the popes seal of the fisherman.

This designation affirms and strengthens the unit of our local faith community with the university church and the Roman pontiff,said Rev. Daniel R. Jenky, C.S.C., then rector of Sacred Heart and now bishop ofPeoria.

As a basilica, Sacred Heart may display the papal arms on the churchs exterior, and a basilica bell and papal umbrella are placed near the altar.

In 1686, a French Jesuit priest named Claude Allouez established the first Catholic church, a mission named Sainte Marie du Lac, on the southernshoreofSaint MarysLakenear the present site of Sacred Heart. The mission served local Potawatomi people, French trappers, and other settlers until the British seized the region in 1759 and expelled all Catholic clergy.

In 1832, Rev. Stephen Badin, the first Catholic priest to be ordained in theUnited States, rebuilt the chapel and re-established the mission begun by Father Allouez.

In 1842, upon founding the University of Notre Dame, Rev. Edward F. Sorin, C.S.C., assumed pastoral responsibility for the area and renamed the mission Notre Dame du Lac. He replaced Father Badins chapel with a much larger log chapel which served the community until 1848, when a new church was built on the site and dedicated to the Sacred Heart of Jesus. That church, much smaller than the present one, was 90 feet long, 38 feet wide and 24 feet high.

Construction for the current Basilica of the Sacred Heart began in 1870, and the cornerstone was placed a year later. The architectural style of the church is Gothic Revival. It is built in the form of a Latin cross, 275 feet long and 114 feet wide. It has a chancel and seven apsidal chapels. Its 24-bell carillon, the oldest in North America, is housed in a 218-foot spire and includes a seven-ton bell named after St. Anthony ofPadua. Relics of St. Marcellus, a third century conscientious objector who was executed for refusing to serve in the imperial army of Rome, are enshrined beneath its main altar, and relics of another third century Roman martyr, St. Severa, are venerated in one of the apsidal chapels. The cross standing atop the basilica is the highest manmade point on the Notre Dame campus.

The walls and ceiling of the basilica feature murals painted in the late 1800s by Luigi Gregori, theVaticans artist-in-residence when Father Sorin persuaded him to come to Notre Dame. The stained-glass windows were created at the Carmel du Mans Glass Works inFrance. Other features of the basilica include a massive Holtkamp organ, a French Gothic altar, andfamed sculptor Ivan Mestrovics pieta,Descent From the Cross.The most recent of three restorations of the basilica was completed in 1990.

Mass was first celebrated in the Basilica in 1875, and it was officially consecrated by Bishop Joseph Dwenger ofFort WayneonAug. 15, 1888. The basilica is served by priests, brothers and sisters of the Congregation of Holy Cross and is the main church for the University and for Sacred Heart Parish.