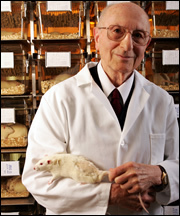 A robust 88-year-old, Pollard continues to follow a professional regimen that would tire a researcher half his age. He works from home each morning, a small concession to hip and back injuries sustained in a fall two years ago while inChicagofor an academic meeting. Most afternoons, he can be found in the Lobund Laboratories, in the Reyniers Annex on the far north end of campus. He happily surrendered prime lab space in the center of campus years ago so theCollegeofSciencecould use it to help recruit young, topflight researchers: budding Morris Pollards if you will.

In the past two months alone, Pollards off-campus obligations have included lectures inSan Diego,Seattle,Washington, D.C., andIndianapolis. A sudden need for hip replacement surgery will force him to forgo a June conference inTokyo, but he promises to be back chasing down answers to prostate cancer as soon as possible.

I cant imagine doing anything else,he said.I think if you are doing something meaningful and important and you stop doing it, youll always look back with regret.

Pollard, who has published more than 300 scientific articles, oversees the longest running medical research program at Notre Dame. For more than 40 years, he has been using germ-freeLobund-Wistarrats to study disease mechanisms.

Among his important findings: While 30 percent of all the rats develop prostate cancer spontaneously by age two, only three percent of those fed a diet rich in soy protein exhibited the disease at that age. And importantly, refractory prostate cancers were significantly prevented in the soy-consuming rats. Refractory tumors are fast-growing, invasive, metastatic, and resistant to a wide range of therapies. Since neither prevention nor therapy is feasible against the development of refractory cancers, they are a major impediment to the survival of cancer patients.

World War II interrupted Pollards early career studying avian leukemia at the U.S. Department of Agriculture . He rose to lieutenant colonel while serving four years in the U.S. Armys Veterinary Corps, where he focused on typhus, Q and dengue fevers, and exotic viruses from the Pacific Southwest.

Under Gen. George Marshalls personal orders, Pollard was sent to the Service Command Laboratory at Fort Sam Houston inSan Antonio,Texas, where he set up a lab to investigate exotic viruses and to test appropriate vaccines. The work was fraught with danger.

Two of my staff caught infections and died and several were left with great disabilities,he said.

During 15 years as a professor in the Department of Preventative Medicine,UniversityofTexas Medical Branch, he was the first to propagate trachoma virus in vitro, and he developed diagnostic tests for poliomyelitis.

In 1961, at the height of his research career atTexas, Pollard was approached by Notre Dames president, Rev. Theodore M. Hesburgh, C.S.C., about taking over the then-declining Lobund facility.

During my meeting with Father Hesburgh, I expressed some trepidation about how I, as a Jewish person, might fit in at Notre Dame,Pollard remembers.He told me, Youll fit in fine. All of us at Notre Dame are trying to get out of our own ghettoes.

From discovering the benefits of aspirin-like drugs in treating intestinal cancer to his continuing work on prostate cancer, Pollard has had an illustrious scientific career at Lobund. He also has found a home.

Upon returning from a recent trip to deliver a lecture, Pollard received a note from Father Hesburgh that read,Welcome home. (Signed,) The family.