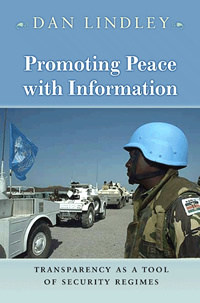 In his new bookPromoting Peace with Information,just released by Princeton University Press, University of Notre Dame political scientist Dan Lindley explores the idea that peacekeeping institutions such as the United Nations can reduce the risk of war by increasing transparency between adversaries.

Transparency relates to the amount of information that states, adversaries and other groups know about each others intentions and capabilities. It can be increased through forums, radio and television broadcasts, on-site inspections and monitoring, posters, theatrical presentations and other activities. Lack of transparency is thought to heighten suspicions, lead to miscalculations and fuel arms races.

Lindley investigates how and under what circumstances these mechanisms increase transparency and whether they actually promote peace. His nuanced findings – that sometimes transparency succeeds dramatically or helps moderately and sometimes it fails altogether – break new ground among scholars who previously have been divided into what he calls thetransparency pessimistsandtransparency optimists.

Dan Lindley is scrupulously fair in his presentation of case-study materials and his evaluation of his hypotheses,Charles Lipson of theUniversityofChicagowrote of the book.Readers ought to feel they are in sure, capable and unbiased hands.

Through numerous interviews and visits to the U.N. and areas of conflict around the world, Lindley examined cases as diverse as contemporary peacekeeping operations in Namibia, Cyprus, Cambodia and the Golan Heights, as well as the early 19 th century Concert of Europe (which sought to keep the peace after Napoleons defeat). Whileconcluding that transparencyfalls short of being an elixir of peace,Lindley nonetheless demonstrates how and when information can be an effective tool for alleviating hostility and fear.

Information is power,Lindley says.And information in the hands of the U.N. has untapped power to promote peace.

A member of the Notre Dame faculty since 1999, Lindley also is a fellow of the Universitys Kroc Institute for International Peace Studies.

The 2005-06 recipient of the Kroc Faculty Associate Fellowship, he is at work on the second phase of his fellowship project titledIs War Rational?The study attempts to explain why the success rate of those who initiate wars has plummeted since the middle of the 20 th century – from 73 percent in the 1800s to less than 33 percent since 1945.

Its clear that the utility of war has declined markedly,Lindley wrote.Policymakers should know that war is a bad bet.