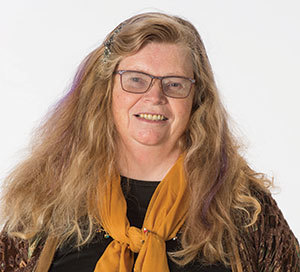 Nuala Ní Dhomhnaill is Patrick B. O’Donnell Distinguished Visitor at the Keough-Naughton Institute for Irish Studies at the University of Notre Dame. Widely regarded as the greatest living poet in the Irish language, this fall — as she does every third year — she’s teaching a course on 20th-century Irish-language poetry at Notre Dame.

She teaches the old-fashioned way, she notes, “Chalk and talk. No PowerPoint. But the students at Notre Dame listen. They’re very patient. We’re all involved in something called learning, which is bigger than both of us. I’ve taught at five different universities in the States, and I much prefer Notre Dame to anywhere else. It’s marvelous.”

One of the questions she’s invariably asked is “Why?” Why does she write exclusively in Irish? Read the poem, she replies. In an essay she wrote for the New York Times (Jan 8, 1995) she said: “And yet, and yet . . . I know this will sound ridiculously romantic and sentimental. Yet not by bread alone . . . We raise our eyes to the hills . . . We throw our bread upon the waters. There are mythical precedents. Take for instance Moses’ mother, consider her predicament. She had the choice of giving up her son to the Egyptian soldiery, to have him cleft in two before her very eyes, or to send him down the Nile in a basket, a tasty dinner for crocodiles.

She took what under the circumstances must have seemed very much like “rogha an dá dhiogha” (“the lesser of two evils”) and Exodus and the annals of Jewish history tell the rest of the story, and are the direct results of an action that even as I write is still working out its inexorable destiny. I know it is wrong to compare small things with great, yet my final answer to why I write in Irish is this:

The Language Issue
I place my hope on the water
in this little boat
of the language, the way a body might put
an infant
in a basket of intertwined
iris leaves,
its underside proofed
with bitumen and pitch,
then set the whole thing
down amidst
the sedge
and the bulrushes by the edge
of a river
only to have it borne hither and thither,
not knowing where it might
end up;
in the lap, perhaps,
of some Pharaoh’s daughter.
From “The Pharaoh’s Daughter,” 1994, translated by Paul Muldoon

Her mother, a native Irish speaker, didn’t hold much with the notion, Ní Dhomhnaill adds. When her mother called and — making conversation — asked what she’d been writing lately, Ní Dhomhnaill said, “Oh, an essay for the New York Times about what it’s like to write in Irish.” After a few seconds pause, her mother replied, “Well, I hope you’ll tell them it’s mad!”

Ní Dhomhnaill was born in Lancashire, England, to Irish physicians who worked in an Irish mining settlement in Lancashire. At the age of 5, she was sent to live with relatives in the Irish-speaking areas of West Kerry. Her parents returned to Ireland a few years later, in 1957.

In a 2006 interview, she recalled leaving Ireland in the early 1970s, when she met a man — a Turkish man — fell in love and married. Her husband Dogan Leflef was a geologist (“and a mathematician at heart”). He completed his Ph.D. in Holland, “Thought the nearest sedimentary rock, old red sandstone, was in Munster, Ireland. That’s where we met. There was pandemonium at home about it. So I left home when I was 21 and swore I would never set foot on that benighted island again.”

They lived in Holland, then for five years Turkey. “In those days our only contact with the rest of the world was by express letters. Four days there, and four days back. Turkey had cut itself off. But that five years made me. I learned more there than I’ve learned in my whole life. Now I have two countries that are my home.”

Her first volume of poetry was published in 1981, after their return to Ireland. “The language drew me back,” she wrote in the New York Times essay. “A loneliness for the language, and the music … Even in Dublin I’m quite lonely, because I can’t go out and speak Irish on the street or just ring somebody and have a conversation in Irish for fun. Radio na Gaeltachta is my lifeline. If it weren’t for that, I’d be as exiled in Dublin as I was in Ankhara.”

Ní Dhomhnaill hears poetry in Irish, a language, she says, “of beauty, historical significance, ancient roots and an immense propensity for poetic expression through its everyday use.” And the students who learn it have a wealth of written material to work with, since Irish is the oldest vernacular language in Northwest Europe — the earliest writings in Irish date to the third and fourth centuries, and there’s a vast amount of medieval material available.

“Notre Dame has the only Irish language degree program in the States. It’s way ahead of anyone else. Many of my students are math or biology majors. A good liberal arts background is very important for life. It’s part of education. It draws the best out of you. Some of my best students are not humanities majors. My husband was a scientist. He was logical and rational. We brought out different sides of each other. Two sides, making each a more well rounded person.”

The Irish language is ineffable, Ní Dhomhnaill adds, something that’s too powerful to express in mere words. “The language is spoken now, and has 1,500 years of written literature, a heroic culture, behind it. It’s not like anything else.” In her own poetry, Ní Dhomhnaill says, poems come in images and phrases, “Sort of insistent, musical phrases. As a musician would put down notes, I, as a poet, put down words. If it doesn’t come that way, it feels forced.

“It’s growing, mulling. I write the poem out, longhand. Then I type it up and see what it looks like. Sometimes I’m walking and wham! An eight-line stanza, or two six-line stanzas will come to me, but I have to wait for it to mature. It’s a kind of gestation. And,” she adds, “it’s the only thing I have a knack for.”

Contact the Department of Irish Language and Literature for more information, or Sarah McKibben, McKibben.2@nd.edu.