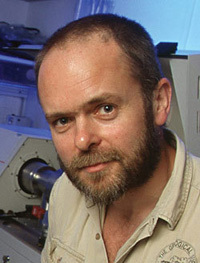 In 1980, a group of scientists suggested that a large meteorite slammed into Earth 65 million years ago, causing one of the most severe mass extinctions of life in the planet’s history and ending the Age of the Dinosaurs. The discovery in 1991 of a 200 kilometer wide impact crater in Chicxulub in the Yucatan, Mexico, coincided with the mass extinctions and the ”Chicxulub impact” hypothesis gradually gained overwhelming acceptance in scientific circles.

However, in recent years, a number of scientists have challenged the asteroid impact and mass extinction hypothesis. In response, a distinguished panel of 41 experts from Europe, the U.S., Mexico, Canada and Japan that included Clive Neal, professor of civil and geological sciences at the University of Notre Dame, re-analyzed the relevant literature in the field and examined new data from the analysis of ocean drilling and continental sites. In a paper appearing in today’s edition of the journal Science, Neal and the team of researchers find that alternative hypotheses fail to explain the mass extinction and contend that the Chicxulub impact hypothesis is stronger than ever.

Fossil evidence clearly shows that a mass extinction event occurred across Earth roughly 65.5 million years ago. The change was so dramatic that geologists use it to define the end of the Cretaceous period and the start of the Paleogene period. They call the time of the extinctions the “K-Pg boundary.”

Critics of the Chicxulub theory suggest that the impact occurred 300,000 years before the K-Pg boundary and was therefore too early to have caused the mass extinctions. Some critics have hypothesized that unusually active volcanoes known as the Deccan Traps, which occurred in the area of modern day India, resulted in global cooling and acid rain that caused the mass extinctions.

In their Science paper, however, Neal and the team of researchers state their comprehensive analysis of the data clearly suggests that a large asteroid impact into the sulfate-rich sediments at Chicxulub remains the most plausible cause for the K-Pg boundary mass extinction.

A member of the Notre Dame faculty since 1990, Neal uses petrology and geochemistry to investigate the environment from planetary differentiation to heavy metal pollution. His research is not constrained to the Earth and uses samples and geophysics to study the moon and Martian meteorites. His interests also include the evolution of the moon and Mars and the origin of the solar system.