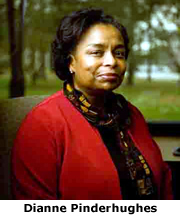 Hybrids and blends had defined Dianne Pinderhughesdestiny long before an academic career that bridges two departmentslong before she was born, in fact.

In 1902, her great-grandmother petitioned aProvidence,R.I., court to change the family name from Hughes to Pinderhughes. Great-grandmothers maiden name was Pinder, and she wanted it preserved.

If someone tells me theyve met a Pinderhughes, its bound to be one of my cousins,says the professor who is in her first year on the Notre Dame faculty.Its a fun name.

Dual interests began marking her career early on. It is firmly planted in political scienceshe is, in fact, president-elect of the American Political Science Association. But since her first appointment in the government department ofDartmouthCollege, she has been involved in the burgeoning field of African-American studies.

Pinderhughes has reviewed the impact of African-American studies programs at several Ivy League and state universities as a consultant for the Ford Foundation.

We concluded that they had been very important in really energizing the liberal arts in ways that would not have been possible without those programs,she says.

Along with gender studies, the programs have helped open up departments in liberal arts todifferent conceptual and theoretical approaches,she says.

Pinderhughesresearch interests include voting rights issues and racial and ethnic politics. Next semester she will introduce a course on blackChicagopolitics, and the students, she says, already seem to be buzzing about it.

She plans to have students examine the overall demographic, historic, cultural and economic patterns that have led to aracially self-conscious approach to public life.

Pinderhughes came to the attention of the Africana Studies faculty because her students were often accepted as Erskine Peters Dissertation Year Fellows, a Notre Dame program for outstanding African-American doctoral candidates in the arts, humanities and social sciences. She had, herself, known Peters and she had worked on professional committees with political science chair Rodney Hero.

When friends learned she was leaving the more diverseIllinoiscampus for Notre Dame, they openly wondered what cadre of scholars shed be joining.Theres no one there,they would comment.

Her pool of colleagues may be smaller than at her previous posts,but like the rest of the University, theyre very careful, deliberate, thoughtful people.

She appreciates that Notre Dame recognizes the gifts of its African-American scholars with administrative appointments, which is the case with Richard Pierce, chair of Africana Studies; Hugh Page, dean of First Year of Studies, and Don Pope-Davis, interim vice president for graduate studies and research. And she appreciates the additional influences of Hispanic politics, through the work of Hero, and the gender-related political analysis done by Christina Wolbrecht.

Bridging two academic worlds already, she also is casting her attention toward the Helen Kellogg Institute for International Studies, whose work is compatible with her interest in racial, ethnic and political comparisons between theU.S.and such countries asBrazil. Interdisciplinary by nature, Kellogg is well suited to accommodate such interests.