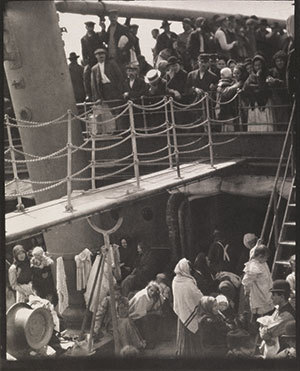 “The Steerage” by Alfred Stieglitz

With everyone who owns a cell phone fancying themselves a photographer, it’s worth remembering that there was a time when a photograph took hours or days to compose and each piece was carefully crafted as a work of art. “Pictorialism: The Fine Art of Photography,” an exhibit that runs until Sunday, March 5, at the Snite Museum of Art, features 50 photographs from the museum’s permanent collection taken from the 1860s until World War I. The breadth of the exhibit is astonishing — from the most well-known photographers of that period, Alfred Stieglitz and Edward Steichen — to lesser-known artists who recorded the lives of Native Americans, or women who portrayed the maternal or bohemian side of the female persona.

“Before Pictorialism, a glut of cheap photographs had created a bad reputation among serious artists,” says David Acton, curator of photography at the museum. These inexpensive portraits and stereographs resulted in the formation of international photography clubs aimed at elevating the medium to a more aesthetic level, says Acton. Characterized by a soft focus and an attention to composition, light and the latest techniques in film development, Acton says the movement mirrors post-impressionism, symbolism, Barbizon and Arts and Crafts schools of art.

A famous photograph by Stieglitz titled “The Steerage” at first glance appears to be about immigrants, with the passengers of the lower and upper decks pictured. “The photograph is extraordinary for its representation of everyday life taking place amidst a manmade setting, the product of the Industrial Revolution,” says Acton. The lower deck passengers are returning to Europe due, in most cases, to disease. “The photograph is soft but not as fuzzy as some others,” Acton says, noting the intricate geometric composition formed by the ship’s ropes and bridges and even the round straw hat on a gentleman on the upper deck. Considered one of Stieiglitz’s most important works, it is complex and detailed.

Another photo by American Alvin Langdon Coburn, “Hyde Park Corner,” pictures a double-decker bus in London’s Hyde Park. “The light is just right, it is very controlled, there are layers, the dark tones are close and the light tones are in the background. It demonstrates a knowledge of a greater world,” Acton says.

“The elegant dreamlike quality of everyday life” is the way Acton describes many of the photographs. When this period ended approximately at the time of the beginning of the first world war, he says the artists’ works transitioned into sharper, hard-focused sculpted images akin to the haunting images from Depression-era artists. Acton says we can learn from Pictorialism. “Art photographs were more fashionable, less expensive and more accessible than paintings and traditional media. The success of Pictorialism initiated a democratizing of fine art.”