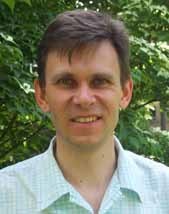 Morton Ring Eskildsen, an assistant professor of physics at the University of Notre Dame, has been awarded an Alfred P. Sloan Research Fellowship.p. Awarded for two-year terms, Sloan Research Fellowships recognize young scientists who show outstanding promise of making fundamental contributions to new knowledge in the fields of chemistry, physics, mathematics, computer science, economics and neuroscience. The foundation reviewed some 400 nominations before selecting 116 fellows. Thirty-two former Sloan fellows have received Nobel Prizes and hundreds have received other prestigious awards and honors.p. Eskildsen is interested in studies of superconductivity, especially in vortices induced in type-II superconductors by an applied magnetic field. Such vortices consist of a core region in which superconductivity is suppressed. Outside the core, the superconducting state recovers over a characteristic lengthscale— the coherence length. Furthermore, supercurrents circulating around the vortex screen the magnetic field and confine it to the vicinity of the vortex. This screening, which is usually referred to as the penetration depth, is the second characteristic lengthscale of a superconductor.p. Eskildsen joined the Notre Dame faculty in 2003.