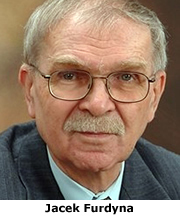 Jacek Furdyna, Aurora and Tom Marquez Professor of Physics at the University of Notre Dame, will receive an honorary doctor of science degree May 12 (Saturday) during commencement ceremonies atPurdueUniversitysWest Lafayettecampus.

In its announcement of the honor, Purdue noted,Throughout his career Dr. Furdyna projected the image of an extraordinarily creative scientist with a special talent for identifying fascinating new problems and new directions.

Furdyna was born inPolandand was deported at age 6 to theSoviet Unionwith the outbreak of World War II. He spent much of his childhood inKazakhstanandUzbekistan, and after his release from theUSSR, inIran,Iraq,Palestine, and in theUnited Kingdom, before immigrating to theUnited States.

Furdyna earned his bachelors degree atLoyolaUniversityinChicago, and his doctorate atNorthwesternUniversity. From 1962 to 1966, he was on the research staff of the Francis Bitter National Magnet Lab at the Massachusetts Institute of Technology.

He came to Purdue in 1966 as an associate professor of physics and established a new program in magnetic semiconductors and gained an international reputation through imaginative research on various topics in this field.

Furdyna, who joined the Notre Dame faculty in 1986, is a fellow of both the American Physical Society and theInstituteofPhysics.