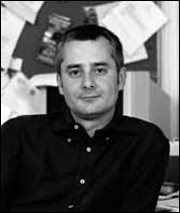 Albert-László Barabási, Emil T. Hofman Professor of Physics at the University of Notre Dame, has been elected an external member of the Hungarian Academy of Sciences. External members are those who reside outside of Hungary.p. Barabási, 37, who holds a Hungarian citizenship, is the youngest member elected to the academy. His award citation reads, in part,His latest and most important results relate to networks, where his work led to the emergence of a new field with big impact on the development of many other areas of science (physics, biology, engineering and social sciences).p. A member of the Notre Dame faculty since 1995, Barabási is a pioneer in networking as a unified scientific theory and the author ofLinked: The New Science of Networks.He has examined network patterns in all aspects of life, from the worldwide spread of AIDS to social relationships, the World Wide Web and cellular systems. His work has been published regularly in the highly prestigious scientific journals Science and Nature.p. The Hungarian Academy of Sciences is an independent public body of scientists and engineers dedicated to the furtherance of science and its use for the general welfare. Its origins go back as far as 1808, when the Hungarian Learned Society was established by Act VIII of the Hungarian Parliament in order to promote the development of Hungarian language, science and technology.p.