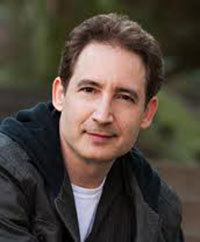 Brian Greene, the best-selling author of “The Elegant Universe” and “The Fabric of the Cosmos” and host of two NOVA series based on his books, will present a public lecture March 6 (Tuesday) in the Decio Mainstage Theatre of the University of Notre Dame’s DeBartolo Performing Arts Center.

The lecture is free, but ticketed. Tickets can be reserved beginning Feb. 21 (Tuesday) at the DeBartolo Center ticket window or by calling 574-631-2800.

Greene also will be presenting a colloquium on the foundations of string theory March 6 at 4 p.m. in 105 Jordan Hall of Science. Tickets are not required for the colloquium.

Greene’s lecture is part of a three-lecture series that explores the topic of “Finding our Way in the Cosmos.” A Feb. 15 lecture was delivered by the Rev. Jose Funes of the Vatican Observatory, and Brian Schmidt, co-recipient of the 2011 Nobel Prize in Physics, will speak on Feb. 27.

A professor of physics and mathematics at Columbia University, Greene is a leading physicist and string theorist. His first book, “The Elegant Universe,” recounted how the theories of general relativity and quantum mechanics transformed our understanding of the universe and sold more than a million copies. The book was transformed into an Emmy- and Peabody-winning NOVA series, hosted by Greene.

His second book, “The Fabric of the Cosmos,” spent six months on the New York Times best-seller list and was made into a four-part NOVA special that aired this past fall. His newest book, “The Hidden Reality: Parallel Universes and The Deep Laws of the Cosmos,” explores the strange and exciting possibility that our universe may be one of many populating a grand “multiverse.”

In addition to hosting his two NOVA series, Greene has appeared on “The Late Show with David Letterman,” in the movie “Frequency,” “The Big Bang Theory” and is a frequent guest on “The Colbert Report” and “The Daily Show with Jon Stewart.”