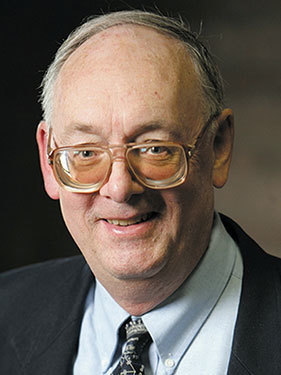 University of Notre Dame computer science and engineering professor Peter M. Kogge, developer of the space shuttle I/O processor, the world’s first multicore processor, and a number of other important innovations, was awarded the Charles Babbage Award at the Institute of Electrical and Electronics Engineers’ (IEEE) 2014 International Parallel & Distributed Processing Symposium in Phoenix earlier this year.

The Babbage Award, presented since 1989, is bestowed in recognition of exceptional contributions to the field. Considered the father of the computer, Babbage is the English mathematician, philosopher, inventor and mechanical engineer who originated the concept of a programmable computer.

Kogge, who has served as the Ted H. McCourtney Professor of the Department of Computer Science and Engineering at Notre Dame since 1994, was recognized “for innovations in advanced computer architecture and systems.” His research areas include massively parallel processing architectures, advanced VLSI and nanotechnologies and their relationship to computing systems architectures, non-von Neumann models of programming and execution, and parallel algorithms and applications and their impact on computer architecture.

Kogge has been at the forefront of several innovations that have shaped the computing industry over the past several decades. While working on his doctorate at Stanford University in the 1970s, he invented the Kogge-Stone adder process, what is still considered the fastest way of adding numbers in a computer.
During his 26-year career at IBM, Kogge, an IBM Fellow, designed the space shuttle I/O processor, one of the first multithreaded computers and the first to fly in space. Kogge was also inventor of the world’s first multicore processor, EXECUBE, which he and his IBM team placed on a memory chip in an early effort to solve the data bottleneck problem.

An IEEE Fellow, Kogge also won the 2012 Seymour Cray Award. He is the co-inventor on more than three dozen patents and the author of two textbooks, including the first textbook on pipelining, a now ubiquitous technique for executing multiple instructions in a computer in parallel. He has also led a team of computer professionals for the U.S. Defense Advanced Research Projects Agency to explore development of a supercomputer capable of executing a quintillion mathematical operations per second.