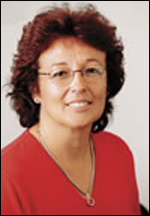 Peruvian human rights advocate Sofia Macher will receive the 2004 Notre Dame Prize for Distinguished Public Service in Latin America at a ceremony in Lima on June 23. Notre Dame president Rev. Edward A. Malloy, C.S.C. will travel to Lima to present the award.p. Macher, a staff member of Peru’s Instituto de Defensa Legal, has been a prominent figure in her country’s attempt to recover from a two- decade-long civil war. She helped establish Perus Truth and Reconciliation Commission in 2000 and served as a commission member from 2002 to 2003, investigating a long period of terror and human rights abuse. She presided at public hearings and administered victim and witness protection programs that aided the commission’s investigation. In the face of occasional death threats, her 24-year career as a social justice advocate also includes service as the executive secretary of a coalition of Peruvian human rights organizations. She was widely acknowledged as the voice of the Peruvian human rights movement during the 1990s administration of President Alberto Fujimori and has since then been active in women’s issues and addressing the food and healthcare needs of displaced indigenous people.p. Established in 1999 with funding support from The Coca-Cola Company, the Notre Dame Prize for Distinguished Public Service in Latin America is given annually by the University’s Kellogg Institute for International Studies to an individual from that region who has honestly, effectively and substantively furthered the public good in one or more countries of the region by his or her accomplishments in government, nongovernmental organizations, religion, education, the media, philanthropy, or other forms of civic leadership. The award carries a cash prize of $10,000, with an equal sum to be given to a Latin American charitable organization chosen by the recipient.p. Brazilian president Lula da Silva and former Brazilian president Fernando Henrique Cardoso won the 2003 Notre Dame Prize. Other previous recipients include Cardinal Archbishop Oscar Rodriguez of Tegucigalpa, Honduras, in 2002; former president Patricio Aylwin of Chile in 2001; and Enrique Iglesias, president of the Inter-American Development Bank, in 2000.p.