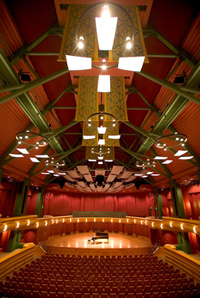 The University of Notre Dame’s DeBartolo Performing Arts Center has announced its Visiting Artist Series for the 2009-10 season, which begins Sept. 4 with a “welcome home” performance by opera star Nathan Gunn.

One of the nation’s most in-demand opera singers, South Bend native Gunn has won awards and critical praise for his performances in such works as “Billy Budd” and “Hamlet.”

The 2009-10 season offers an expanded series of commissions designed to have the audience defining, imagining and examining art.

L.A. Theatre Works and Tim Robbins’ The Actors Gang will return to Notre Dame with world and regional premiere theater commissioned by the performing arts center.

New for the 2009-10 season will be family programming focused on literature and designed for younger children, including an Enchantment Theatre Company production of the “Adventures of Harold and the Purple Crayon” and performances of Tomie dePaola’s “Strega Nona” by Eva Price, Maximum Entertainment Productions.

Ticket and subscription information, along with a complete schedule of visiting artists and performances, are available on the Web at http://performingarts.nd.edu or by visiting or calling the performing arts center ticket office at 574-631-2800.