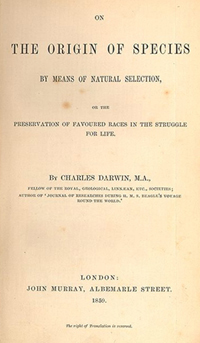 A pair of University of Notre Dame professors will celebrate the 150th anniversary of the publication of Charles Darwin’s “Origin of Species” with a performance of a fictionalized dialogue between Darwin and one of his harshest scientific critics at 8 p.m. Tuesday (Nov. 17) in the Jordan Hall of Science. The event is free and open to the public.

Ronald Hellenthal, professor of biological sciences, will portray Darwin and Phillip Sloan, professor in the Program of Liberal Studies, will portray Sir Richard Owen, founder of the British Museum of Natural History and a harsh scientific critic of Darwin. Edward Manier, professor emeritus of philosophy, will introduce the speakers.

The dialogue will be preceded by a 6 p.m. open house in Jordan Hall’s Museum of Biodiversity.

At 7 p.m., there will be a performance of the sound recording “Time Will Tell,” a comic operetta in the style of Gilbert and Sullivan that depicts Darwin’s life. The piece, written and produced by Robert Pollak and Robert Ashenhurst, was developed for the centennial celebration of the publication of “Origin of Species” in Chicago in 1959. A presentation of the National Film Board of Canada’s 1971 animated short film “Evolution” will follow.

At 9 p.m., there will be a presentation of the Mirage IIID Fulldome production “The Origin of Life” in Jordan Hall’s Digital Visualization Theater.

The anniversary celebration is sponsored by the Department of Biological Sciences, Program of Liberal Studies, College of Science, Digital Visualization Theater and the Museum of Biodiversity.