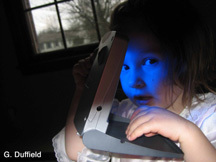 Scientists have long known that interrupting the 24-hour circadian rhythm plays havoc with the lives and health of medical, military and airline personnel, factory employees and travelers.

A new paper by University of Notre Dame biologist Giles Duffield and a team of researchers that appears in this month’s edition of the journal Current Biology sheds new light on circadian timing systems and focuses on a key gene that seems to regulate the response of the circadian clock to light signals.

“Circadian rhythms are important and exciting because they pervade many aspects of biochemistry, physiology and behavior, either subtly or overtly,”Duffield said.“For example, the human sleep-wake cycle is a very obvious rhythm and tightly gated to the night, while perhaps less obvious is that virtually all hormones oscillate with a 24-hour rhythm and up to 10 percent of genes in each cell are rhythmically controlled.”

An estimated 16 percent of the U.S. working population is involved in rotational shift work, and a significant population is affected by jet lag and related sleep-wake disorders. The impact of the large shifts in the body’s internal clock that these individuals experience can be profound, contributing to increased accident rates, medical errors and the development of particular illnesses.

“Both the Three Mile Island disaster in 1979 and the Chernobyl disaster in 1986 occurred late at night or early in the morning,”Duffield said.“Most truck accidents occur around 2 a.m. Incidents of cancer and cardiovascular disease are elevated in trans-Atlantic airline staff and in shift workers.”

The master circadian clock in the human resides within the suprachiasmatic nucleus of the hypothalamic brain and receives direct input from the retina (eye) through which the clock can be reset or synchronized on a daily basis to the prevailing light-dark cycle. This provides both time of day and also time of year information to the brain and body. Things can go wrong with the internal clocks when either the clock system or its light input pathway is disrupted.

Using DNA microarray techniques, Duffield and the other researchers identified an important gene called the"Inhibitor of DNA-binding 2"(Id2) and found that the gene is rhythmically expressed in various tissues including the suprachiasmatic nucleus.

“In the last few years, my laboratory has focused on a family of transcription factor genes expressed in the suprachiasmatic nucleus, liver and heart,”Duffield said."In conjunction with colleagues at Dartmouth Medical School and Norris Cotton Cancer Center, we produced a knockout mouse that does not express the Id2 gene and is thus null for the functional Id2 protein. By exposing these mice to a time-zone change in their light-dark cycle, we were able to examine the effect of artificial jet lag. We altered the light-dark conditions for these mice to produce an effect that was the equivalent of a person flying from Athens to Los Angeles, a 10-hour delay of their cycle.

“We discovered that the knockout mice took only one or two days to recover from jet lag, while unaltered mice required four or five days to fully adjust. It’s like we removed the hand brake on their molecular machinery.”

The experimental results have important implications for understanding the development and functioning of the circadian clock in the brain and peripheral tissues such as the liver and heart.

“Eight years ago, researchers realized that even if you destroy the suprachiasmatic nuclei of the hypothalamus or examine peripheral organs in isolation, there are still working clock systems in many other tissues of the body,”Duffield said.

It turns out that many of the cells throughout our bodies have an intrinsic circadian clock mechanism and that jet lag and shift work can produce internal asynchrony between each of our tissue-specific clocks.

Our brains, on a daily basis, generate the hormonal and neuronal signals that influence the cellular clocks in the peripheral tissues. If this communication line is disrupted, the liver, for example, ends up on one time zone, and the brain on another.

These peripheral clocks in the body’s organ systems cannot themselves receive information directly. To know what time of day it is in relation to the external environment, these tissues depend on signals originating in the suprachiasmatic nucleus:every day the brain sends signals that inform the peripheral cells to adjust the phase of their rhythms, like the pin of a wrist watch being moved a little bit forward or backward.

If we could somehow tinker with this system in the adult human, it might be possible to reduce the effects of jet-lag and shift work by rapidly adjusting our internal clock. Duffield and the team of researchers may have uncovered an important target for such remedies by identifying the Id2 gene, which appears to in some way regulate the magnitude of response of the circadian clock to light signals.

The work was supported by the Royal Society, the Wellcome Trust, the Theodora B. Betz Foundation, the National Institute of General Medical Sciences and Notre Dame.