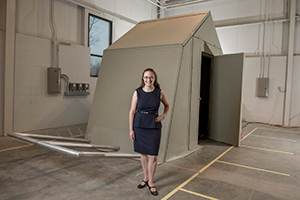 Ashley Thrall with the origami shelter

Most people are familiar with origami, the ancient paper-folding art form that creates unique patterns and shapes. Less familiar is the fact that origami has inspired the design of engineering devices and structures.

Ashley P. Thrall, Myron and Rosemary Noble Assistant Professor of Structural Engineering at the University of Notre Dame, is developing origami-inspired shelters that have many potential uses from military applications to humanitarian assistance. Thrall directs the University’s Kinetic Structures Laboratory, which is devoted to analytically, numerically and experimentally investigating the behavior of a wide variety of moving, modular and deployable structures. It is the only university laboratory in the United States that is dedicated to investigating kinetic structures for civil engineering applications.

Through funding from the U.S. Army Natick Soldier Research, Development and Engineering Center, Thrall, faculty in aerospace and mechanical and also electrical engineering and their team of students and postdoctoral research associates are developing an origami-inspired deployable shelter with integrated planning and management.

“Our goal was to improve the quality of life of soldiers while addressing the need for better energy efficiency in heating and cooling,” said Thrall. “The principles of origami allow rigid wall structures to fold, so not only are they more energy-efficient than canvas tents, but they can also be easily transported. In fact, the structure that we built is the first rigid-wall shelter that is air liftable.”

After experimenting with numerous origami paper models, Thrall and her team came up with a unique origami shelter combined with a novel lever system to easily lift and erect the origami structure. The origami shelter created by Thrall and her team would reduce energy consumption, would be deployable by a few soldiers in about half an hour, and could be transported by plane, ship or truck on a standard military pallet. The team is collaborating with faculty, students and postdoctoral research associates in mechanical and electrical engineering who are developing optimized control systems for heating and cooling to further reduce energy consumption. The rigid wall structure combined with the optimized control system could potentially save the military millions per year. It also holds great promise as an environmentally friendly shelter for disaster relief efforts around the world.

In addition to the origami temporary structures, Thrall’s lab is developing a framework for transitional bridging through a National Science Foundation Faculty Early Career Development (CAREER) award. Through funding by the Department of Energy, Thrall and collaborators are investigating prefabricated high-strength rebar systems with high-performance concrete for accelerated construction of nuclear concrete structures.

For an animation, video and more in-depth look at the project, visit http://nd.edu/features/origami-shelter/.