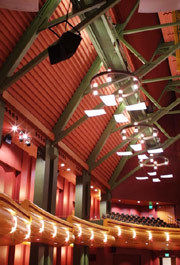 The University of Notre Dame will open the new Marie P. DeBartolo Center for the Performing Arts to both the campus and local communities Sept. 17 and 19 (Friday and Sunday).

Members of the Notre Dame community will tour the PAC and enjoy performances by campus groups at an open house Sept. 17. Doors will open at approximately 4:30 p.m., following a procession across campus led by the Notre Dame marching band from the Main Building and Washington Hall. A similar open house event for the general public will be held Sept. 19 from noon to 5 p.m. at the new facility on the south end of the campus.p. Underwritten with a portion of a $33-million gift to Notre Dame in 1989 from the late Edward J. DeBartolo, a 1932 Notre Dame graduate, in honor of his wife, Marie, the 151,000-square-foot building was built at a cost of $64 million and houses five professional performance halls. The PAC was designed by Hardy Holzman Pfeiffer Associates (HHPA) of New York City and Los Angeles and construction began in September 2001.p. The venues are:p.  The 900-seat Judd and Mary Lou Leighton Concert Hall, underwritten with a gift from South Bend civic leader and philanthropist Judd Leighton and his late wife, which will be used primarily for music performances;p.  The Patricia George Decio Mainstage Theatre, underwritten by Notre Dame Trustee Arthur J. Decio in honor of his wife, which seats 350 and will be a home for undergraduate theater, touring theater companies and Shakespeare at Notre Dame, as well as lectures and dance events;p.  The Regis Philbin Studio Theatre, underwritten by the popular television host and 1953 Notre Dame graduate, a stageless “black box” (where the spatial relationship between actors and audience is completely flexible), which seats 100 and will be used primarily as an undergraduate theater facility;p.  The Michael Browning Family Cinema, underwritten by the family of Browning, a 1968 graduate, a 200-seat theater with 35mm projectors and a state-of-the-art sound system that will show films for instructional and entertainment purposes for students and the general public;p.  The Chris and Anne Reyes Organ and Choral Hall, underwritten by Notre Dame Trustee Chris Reyes and his wife, which features a hand-crafted organ of some 2,550 pipes, and is designed to seat 100 guests and serve Notre Dame’s program of sacred music. The organ was funded by a gift through a charitable remainder trust from the late Marjorie M. O’Malley, a member of Notre Dame’s Advisory Council for the College of Arts and Letters from 1980 to 1986.
p. The PAC also is home to Notre Dame’s Department of Film, Television and Theatre and includes classrooms, editing studios, a recording studio, a scene and prop construction shop, a sound stage, a costume shop, a computer-aided design lab, a lighting lab, and music and theater rehearsal halls. In addition, all five performance spaces are designed to support academic instruction.p. The center’s first season will feature a series of world-class performers, including Wynton Marsalis and the Lincoln Center Jazz Orchestra, which will give the inaugural performance in the Leighton Concert Hall on Sept. 19 (Sunday). Other scheduled performers include the Marcus Roberts Trio (Sept. 24), Second City Comedy (Oct. 22), and the New York Philharmonic (Feb. 3). A complete schedule and ticket information will be available on the Web at http://performingarts.nd.edu or tickets may be purchased by visiting the PAC box office or by telephone at 574-631-2800.p. Contact: John Haynes, executive director, DeBartolo Performing Arts Center, 574-631-5511; Haynes.16@nd.edu p. p.